Devil’s Dome Loop is located in the Pasayten Wilderness which overlaps with the North Cascades National Park. We started on our hike September 18th at the Canyon Creek Trailhead right off Highway 20, which has a large gravel lot for parking, an outhouse, and a stream flowing beside it. To park at the trailhead requires a Northwest Forest Pass, although other passes may also be valid.

Since it was late in the season we only saw a couple other cars in the parking lot, which happened to belong to hunters. We later found out that September 15th through the 25th is known as the “High Hunt” when hunters come out to hunt the deer that go up near the tree line during that time of year.

We heard it can be quite a busy time, often with teams of horses used to haul the meat and equipment, but luckily the grade and trail conditions of this section often made it nearly impossible to take a team of horses up.

Side Note: If you plan on backpacking the Pasayten Wilderness during the High Hunt, September 15th through the 25th, make sure to keep this in mind. While we didn’t have any issues, I feel it could potentially have an impact on the hunters and/or the vibe of your trip.

After flying into Seattle the previous day, we stopped at the Marblemount Ranger Station to pick up any necessary permits/passes, let them know our itinerary, and ask about the trail conditions. While we were there we picked up Green Trail waterproof maps 16, 17, 48, and 49, which between them cover the whole loop. After talking with the Rangers, We decided to take the loop counterclockwise, because we (and our knees) preferred to go up the section that has a steep elevation change, rather than down.

Pro Tip: Prepare for the weather conditions or you’ll end up going down it on the way back regardless – guess how we know.

The hike up is strenuous, full of switchbacks, and has some downed trees over the trail, but had easily accessible streams that we could use to refill our water.

Side Note: As others have reported, the GPS didn’t quite match up with the map for a small portion of this section, but we believe it might have been caused by a small landslide at some point which then caused them to move the trail.

Shortly after the turnoff for the Crater Lake trail we found what appears to be the first available camping spot, which had options for tent placement and enough space to handle two smaller parties. There was also a stream at the Crater Lake turnoff a short distance from the camping area that came in handy.

Even though we tried to check the nearest weather stations to the area we didn’t quite have a grasp on what the weather conditions would be like this time of year. As it turns out, since this is part of the trail is still on the Western side of the mountain range it is highly susceptible to rain, so make sure to bring proper shelter.

Pro Tip: Don’t place your tent in a low lying area – guess how we know.

We were rained on pretty consistently the entire first night and the Half Dome 2 tents didn’t do the best job of keeping the rain out. We were discussing our options after we woke up wet when some hunters started to come back down the trail. They told us there was a three sided shelter at Devil’s Park with some dry wood for a fire that they generously left behind. With that information, we decided to make “The Cabin” our next checkpoint to make a decision since it offered a place to dry out around the fire.

The hike started off flat, which was a nice reprieve from the previous day’s hike, with great views often cut short by the rolling fog. As we started climbing in elevation the light rain transitioned to a slushy sleet and then to snow. 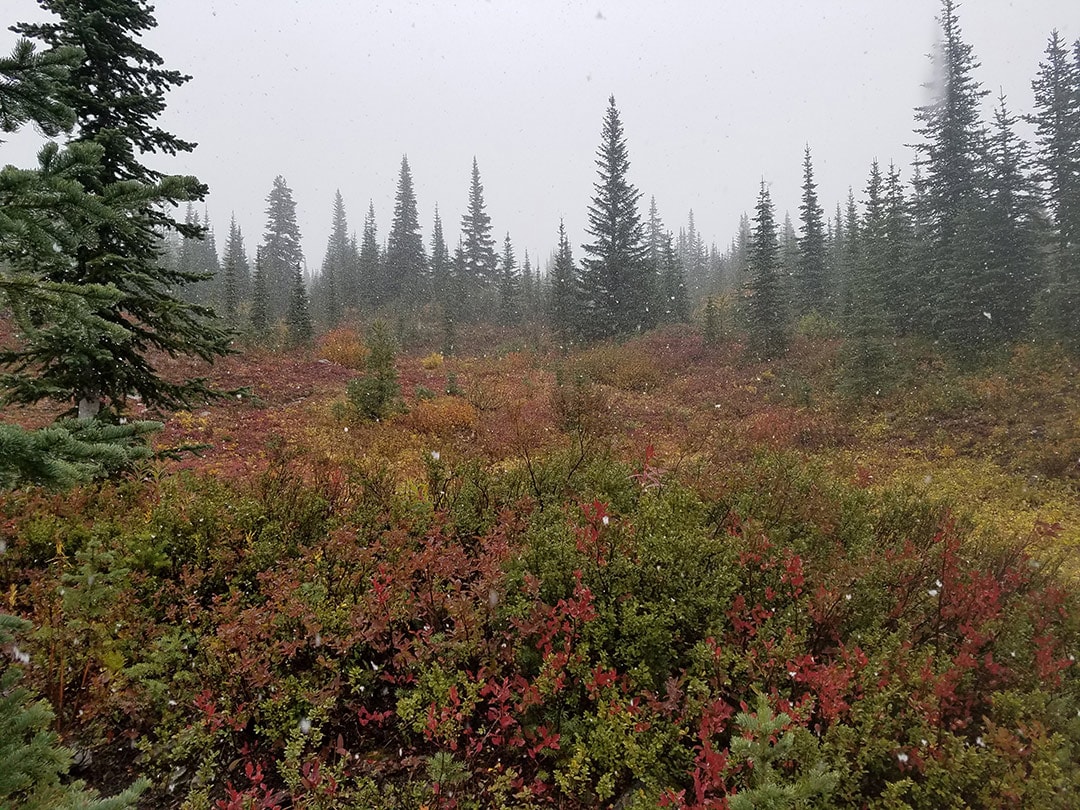 The shelter was a welcome sight upon arrival and we immediately set out on gathering fire supplies before everything became drenched. We ended up spending about 7 hours hanging out and drying everything we could, with a few fire casualties along the way.

Pro Tip: Be patient when drying off by the fire – guess how we know.

There is a stream to refill water and if you are there during the blueberry season there are plenty of opportunities to gather blueberries (or huckleberries – we never confirmed which).

There was an old faded sign posted on the shelter that appeared to say something about it being a snow survey location, but these days it seems to be used by hunters during the high hunt season as there is the perfect backdrop behind it.

One hunter noted that he had been coming out to that shelter for over a decade and had put an effort into upkeep every trip, but noticed fewer and fewer others were helping out in that regard.

Side Note: If you are handy and decide to stop at the shelter, maybe replace a shingle or two with the hammer, nails, and shingles left in the corner. 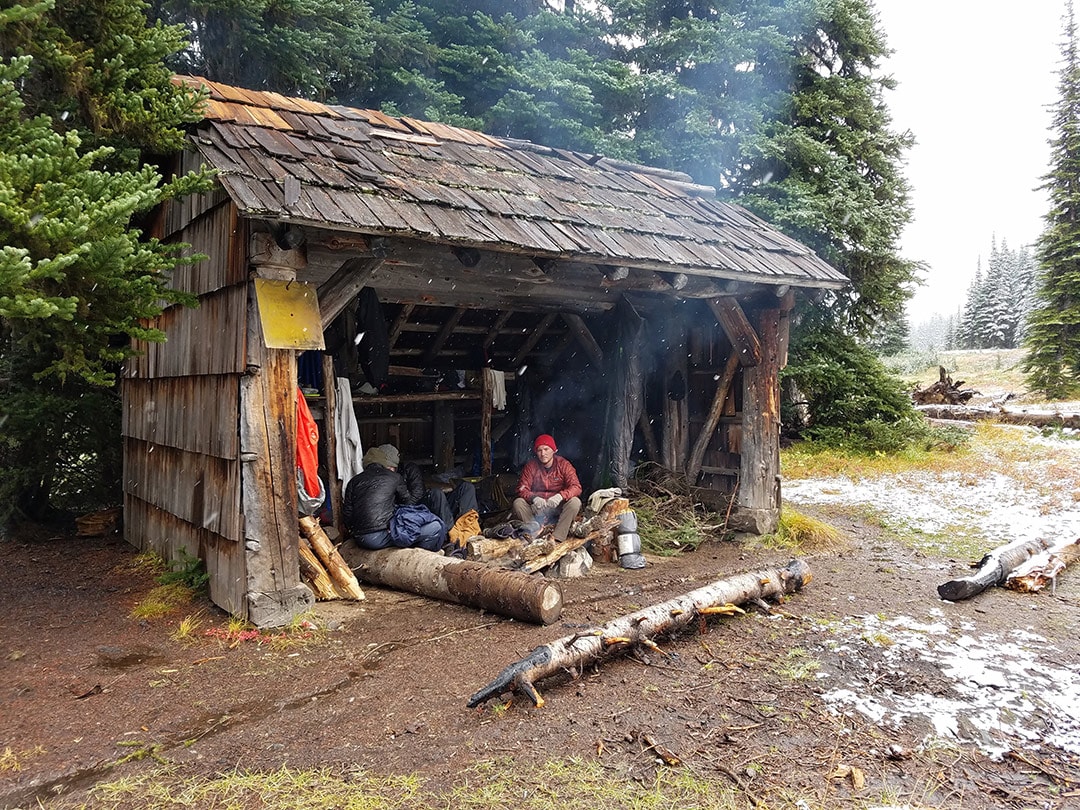 In the morning we decided it would be best to start heading back. It was a tough decision, but probably a wise one given the circumstances. We decided we would do the side trail up to Crater Mountain, then to camp at the same spot we did the previous night before heading back down the next day.

When we got to camp we quickly set up our tents to claim our little corner then ate lunch and started on our day hike. We arrived at Crater Lake, which was an obvious milestone, before taking the short summit trail to the right. The other trail to the left is known to be more treacherous as it has a higher summit and our conditions were less than ideal to begin with. 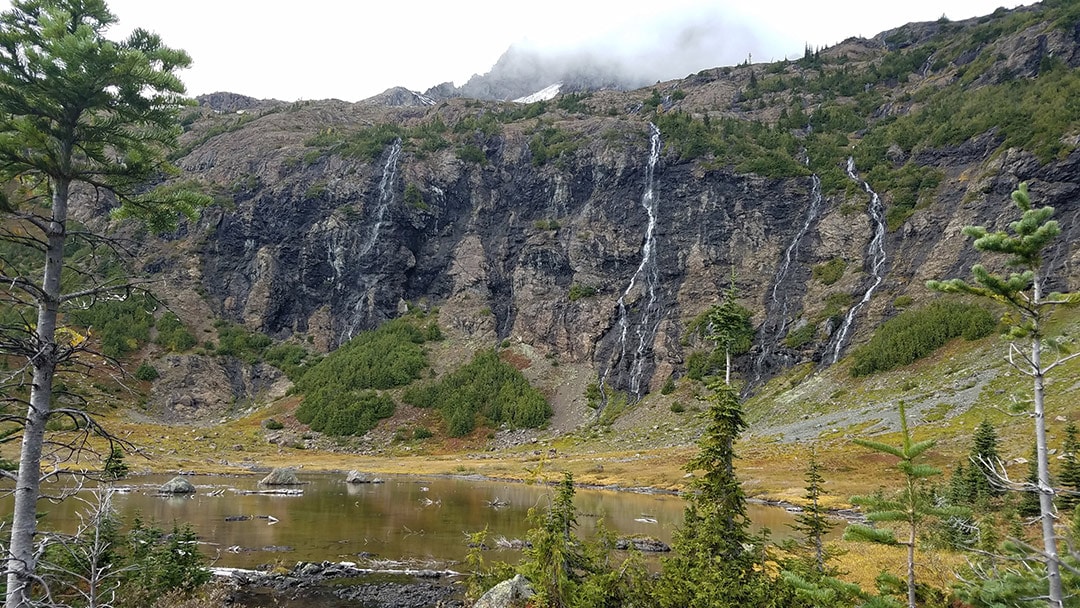 The hike up to the lower summit had more downed trees over the path, but without packs it was trivial to cross them. The weather cleared a little and we had countless views that seemed to get more amazing every few steps you took. It started to gather snow near the top which made the last little stretch interesting. Having hiking poles made a world of a difference and I can’t imagine doing the hike without them.

The view from the lower summit is incredible, with a view of Jack Mountain over a glacial lake. The upper summit is said to be in the top 5 views for the North Cascade region by the out-of-print classic, Routes and Rocks. 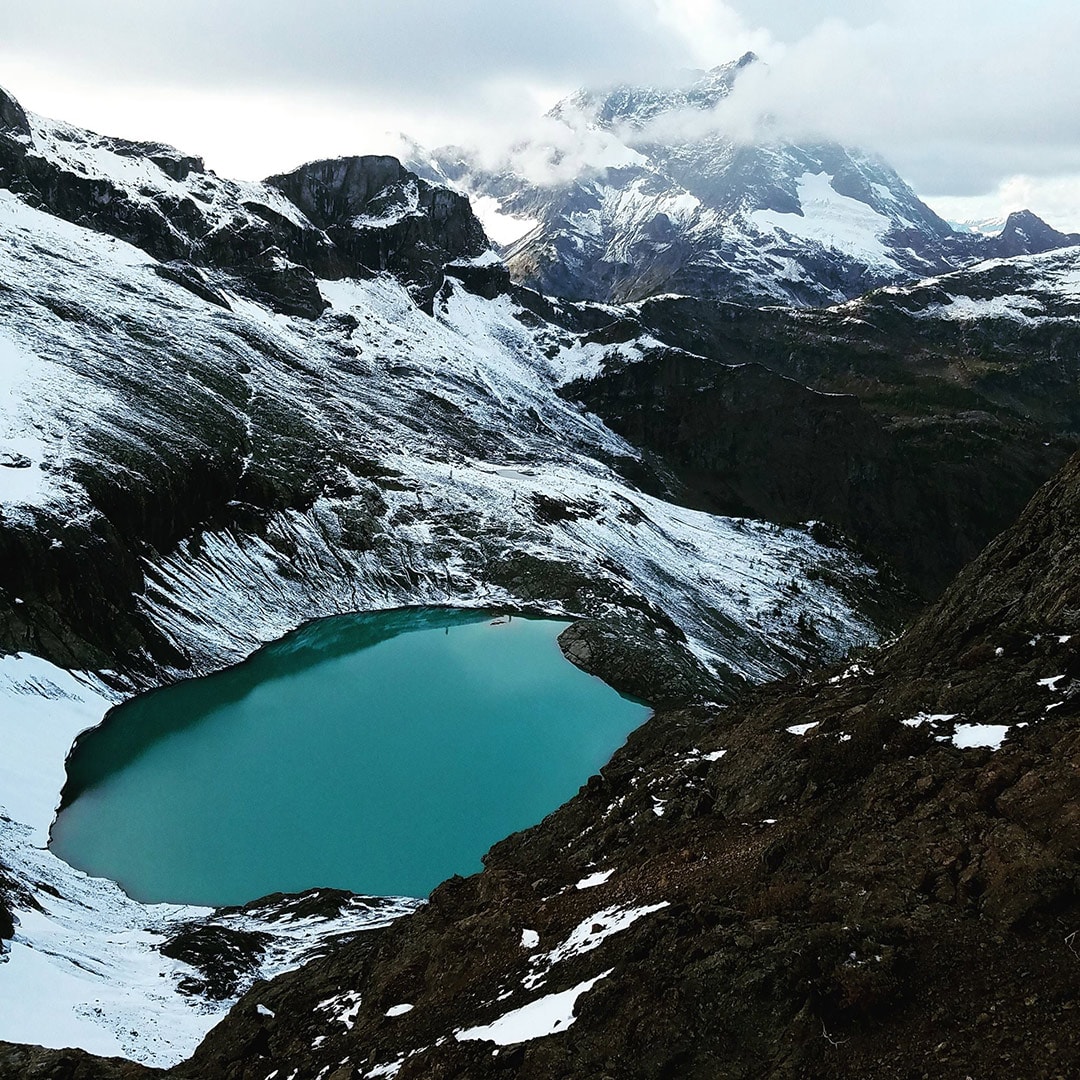 We hung out at the top a little bit, then after taking our fill of pictures, headed back down to camp and start supper. When we got back to camp there was an older gentleman there that said he had just hiked up the steep ascent, didn’t want to go an further, and wanted to know if he could share the site with us, which of course wasn’t a problem.

It worked out great as he had been hiking and bushwhacking in the North Cascades region for around thirty years and dropped a lot of regional knowledge on us – including entertaining demonstrations of the various encounters with elks he’s had on his many hikes and hunts.

Pro Tip: If you have to share the camping spot, be friendly – guess how we know.

We woke up that morning without a solid plan and decided to hike back down, waiting until we got to the trailhead to figure it out.

Once at the trailhead, we met a local camper and he recommended the Maple Pass Loop due to it’s amazing views and the fact that its a day hike. One of the hunters had raved about the Winthrop Ranger station so we decided we would go there as it also happened to be near the Maple Pass Loop. Winthrop has a classic western town vibe with some great scenic views on the drive in.

We got to the station to let them know we were safe since we didn’t stick to our itinerary and found out they only cared if our car was parked at the trailhead for longer than our itinerary stated. After chatting for a little while, we ended up going to a burger joint in town they recommended and camped at Long Fur Campground near the trailhead for the night. We were able to get in some excellent stargazing in now that we were more East of the mountain and the skies had cleared up.

Even though we didn’t finish the whole loop, the first half alone makes it worth it. I would recommend going a little earlier in the season or being more prepared for cold rain and hiking in the snow. I definitely want to go back and explore the North Cascades and Pasayten Wilderness more.