In an attempt to mix things up, some friends and I decided to go on our first sea kayaking adventure in the Salish Sea. We had all done our fair share of other adventures before, but this was brand new territory and a chance to test our abilities with the unknown. 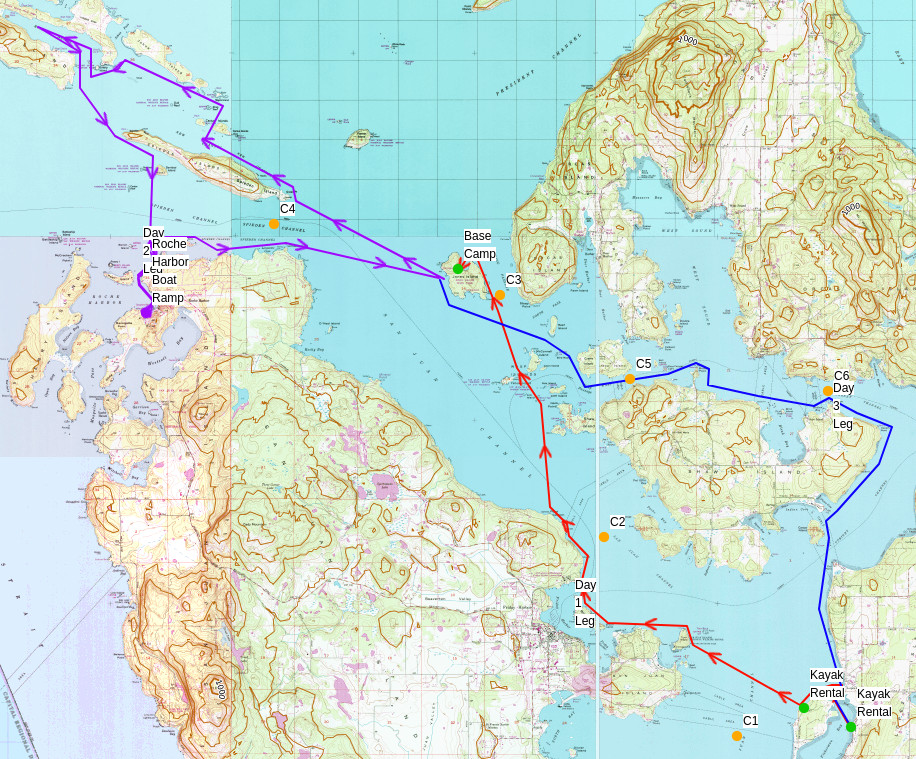 The original route we had mapped out based on Steph Abegg’s trip report.

For reasons I’ll cover later, we ended up using Turn Island Marine State Park as a base camp instead. Even though we didn’t stick to the planned itinerary it still ended up being a lot of fun and, more importantly, a great learning opportunity.

We reserved the 9:35 AM ferry from Anacortes to Lopez Island, because Lopez Kayaks didn’t open until 9:00 AM and we thought that would still allow us to time the tides correctly. In hindsight, catching the 6:15 AM ferry and using that extra time to unload the gear and have it prepped would have given us the margin of error we would need.

On the ferry that morning there was a thick fog with minimal visibility, something we wouldn’t have been able to paddle in and something we didn’t plan for. Luckily, it cleared up by the time we arrived on Lopez Island, but had it happened on the water and forced us to time the tides differently, it would have been a different story.

Since there were three of us, we decided to do one double touring kayak and one single, with a total of five dry bags between us. We had received advice that we wouldn’t need a full wet suit, but according to the 120° Rule and the conditions we encountered wearing at least a farmer john would have put us in a more appropriate safety margin. Dry suits would have obviously been ideal.

Important: It would be a good idea to attend at least a pool session, like one from the Washington Kayak Club, to get first hand experience practicing rescue techniques before it really matters. Between the water temperatures, speed of the currents, and weight of the kayaks, it isn’t that hard for things to go sideways out there. The book Sea Kayaker’s Deep Trouble tells many tales of strong kayakers that have died in those waters.

We finally got the kayaks all geared up and hit the water at 12:00 PM, a bit later than we planned, while the tides stuck to their schedule. Everything was going pretty smooth as we crossed the exposed and windy San Juan Channel, until we neared the Turn Rock Light where we misjudged our approach in the strong tides, causing us to almost get swept North East back out into the middle of the channel where it takes a 90 degree turn.

In what seemed like an eternity of fighting the tides and the wind, we finally made it over to shore to gather ourselves. It turns out there is a small island that shows up at low tide that Turn Rock Light sits on just off of Turn Island that funnels the tide and causes the currents to be quite a bit faster. Another dose of reality, having learned the hard way the limits of the tide charts we had read online.

Note: The interactive CalTopo map of our original itinerary, which is overlaid onto a marine chart, shows the shape of Turn Rock that Turn Rock Light sits on.

We headed off again towards our destination, but shortly after a member of our party started experiencing vertigo, so we pulled back over on land to take a longer rest and discuss our options. We decided on heading back, but to look for camping opportunities along the way just in case.

Luckily for us, we came across a mostly empty Turn Island Marine State Park and were able to pick a prime camping spot right on the bay. We made sure to hang up our food as we heard there is a ruthless gang of racoons on the island, who once chewed through the hull of a kayak to get to some stowed food. We walked around and saw starfish crawling on the rocks and later that night we were lucky enough to be able to hear whales breaching off in the distance as they migrated down the channel. 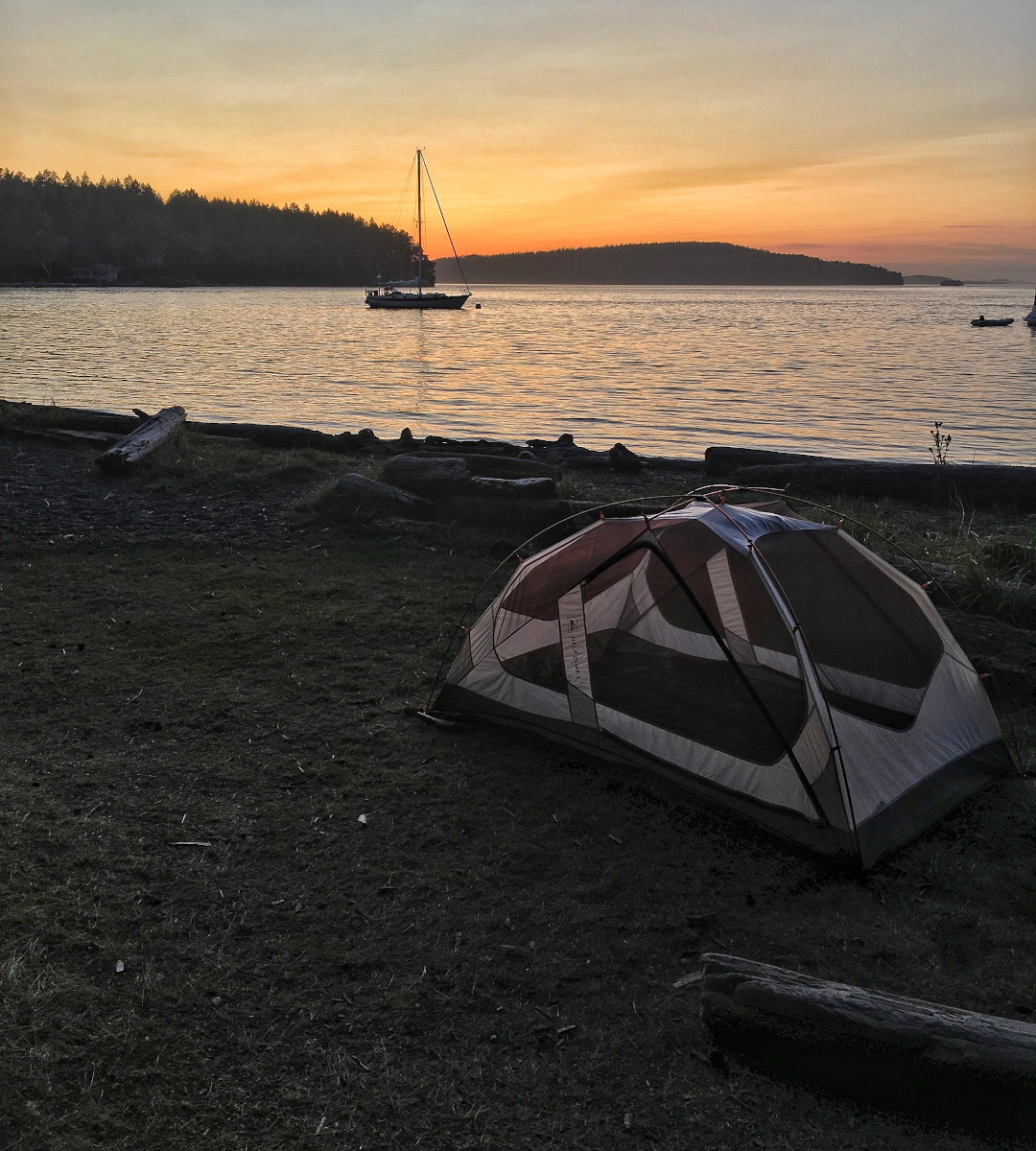 A perfect view from Turn Island of the sun falling behind Friday Harbor.

Since we had planned on having running water available at our original campsite, and Turn Island didn’t provide that, we had to make a trek into Friday Harbor the next day. We decided to wait until lunch time so we could grab a bite to eat and try to hit the slack tide, but not so late that it was high tide while we were there and our potential landing areas would be underwater.

The closer to Friday Harbor we got the more overwhelming it was due to the scattered boats of all sizes, ferries coming to and from the harbor, and sea planes landing and taking off with tourists. We carefully made it into to dock and were able to enjoy some fresh coffee and food before doing some shopping for beer, cheese, and sausage – oh, and water.

We got back to camp where we were greeted by a large group of kayakers that turned out to be members of the Washington Kayak Club. They could tell we were beginners and gave us a bunch of helpful sea kayaking tips that made us more confident going forward.

Once night hit, one of the kayakers came over to tell us that if we were lucky we might get a chance to see the bioluminescence in the bay. Sure enough, it finally got dark enough and it turned out to be an incredible experience as we splashed the water to activate the chemical reaction and sped our kayaks up and down the shoreline as small glowing bow waves formed off the front of the kayak like a scene from Tron.

We woke up early to pack so that we could catch the slack tide back, which worked out perfectly. Crossing the San Juan Channel when everything was completely still and not a boat in sight was a totally different experience. We saw dolphins in the distance and even had some curious seals cruising around our kayaks and poking there little bald heads up to keep an eye on us.

After returning the kayaks, we did some hiking and got in line early for the ferry back, since there are only so many spots available on the return ride and we were told it can get pretty backed up on the weekends.