With a few inches of fresh snow, cold temps, and fairly low wind in the forecast we decided it was a good time to hit the Ptarmigan Ridge. We got eyes on Video Peak the first time we did the Table Mountain Circumnavigation and were stoked to finally get a closer look.

We tried going a little higher on the entrance to the South side of Table from Artist Point, but ended up hitting a little too high and had to drop back down. We were able to able to successfully ski traverse the majority of the way this time though, saving a bunch of energy for the day ahead. 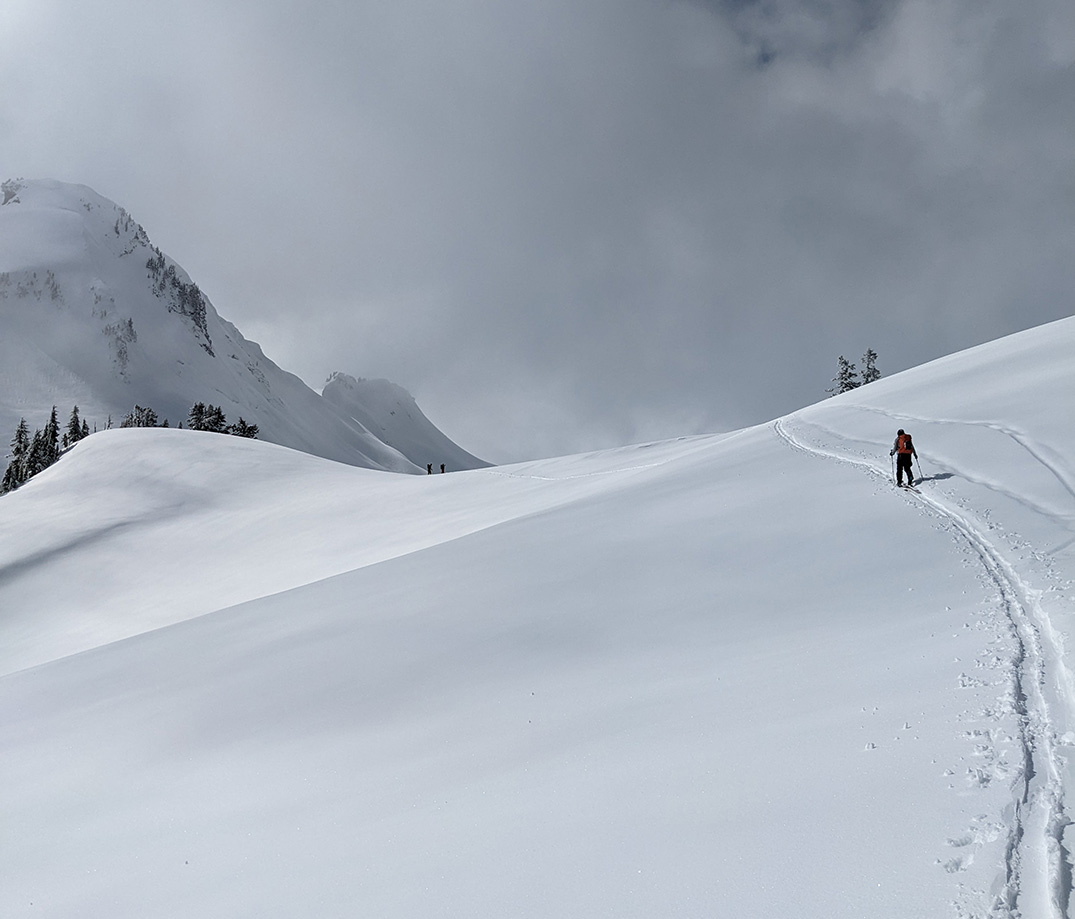 Approaching Ptarmigan Pass after ski traversing the South side of Table Mountain.

During the approach, clouds kept a veil over the top Video Peak, like a bride on her wedding day. The excitement grew the closer we got and the clouds finally parted, giving a glimpse of the run. We noted the cornices guarding the top and a notch near the summit that served as a weakness to drop in on.

Once we felt we had the face memorized we couldn’t wait to rip skins and hit the Ptarmigan Bowl for our first run of the day. The turns ended up being amazing, better than expected, foreshadowing of a great day ahead.

We then skinned up to a saddle on Ptarmigan Ridge just West of Video Peak. Finding the most efficient route up the rolling hills of snow is always a fun game. 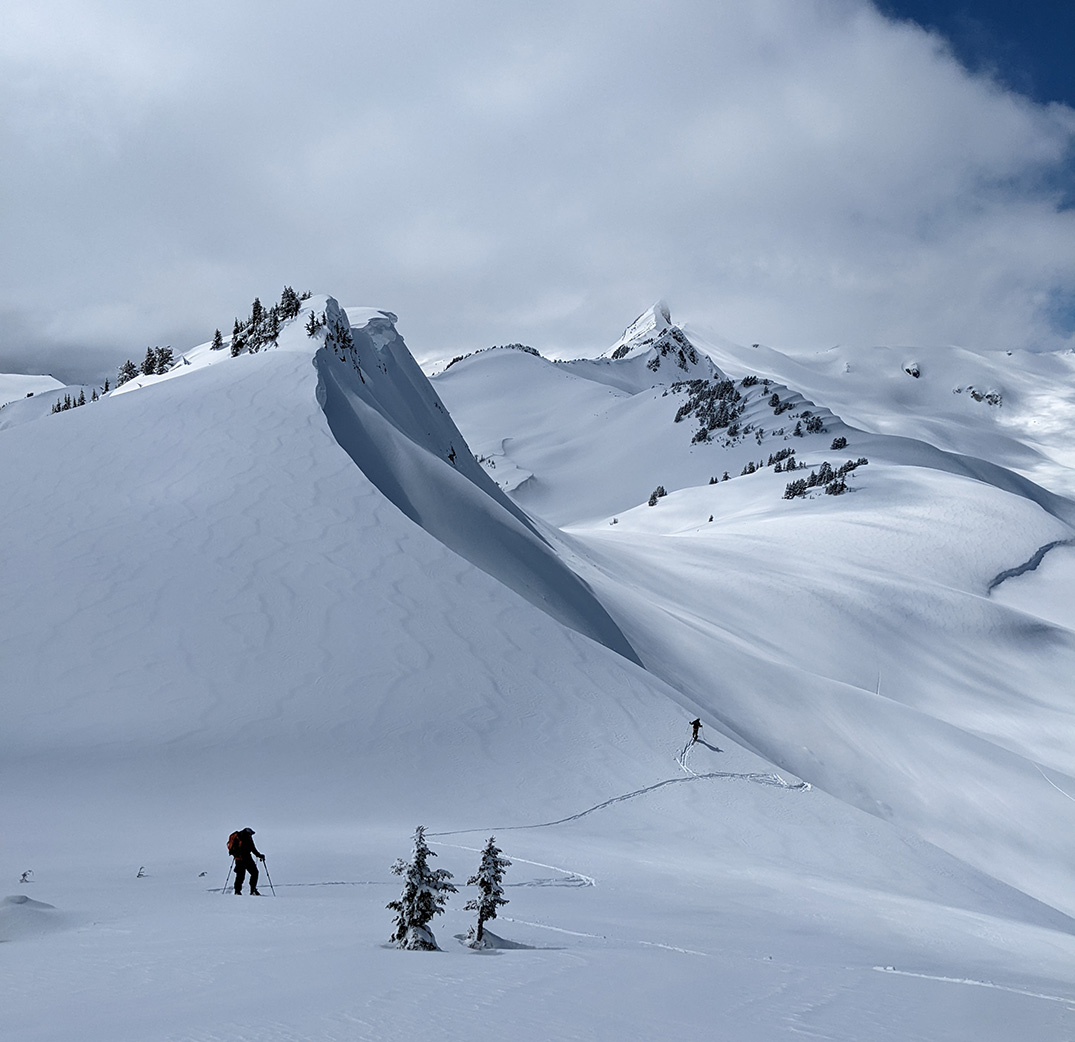 Getting on top of the Ptarmigan Ridge, looking back towards Koma Kulshan.

Once we got on the ridge, the view looking down towards 5830, Coleman Pinnacle, and Koma Kulshan, was filled with jagged curves and soft blankets of snow. Truly a sight to behold.

We originally had plans to go out to 5830, but realized we were too ambitious and decided to focus on getting to know Video Peak, saving 5830 for a later date.

Once we got to the top of Video Peak we checked out how the cornices we had noted below looked from above. 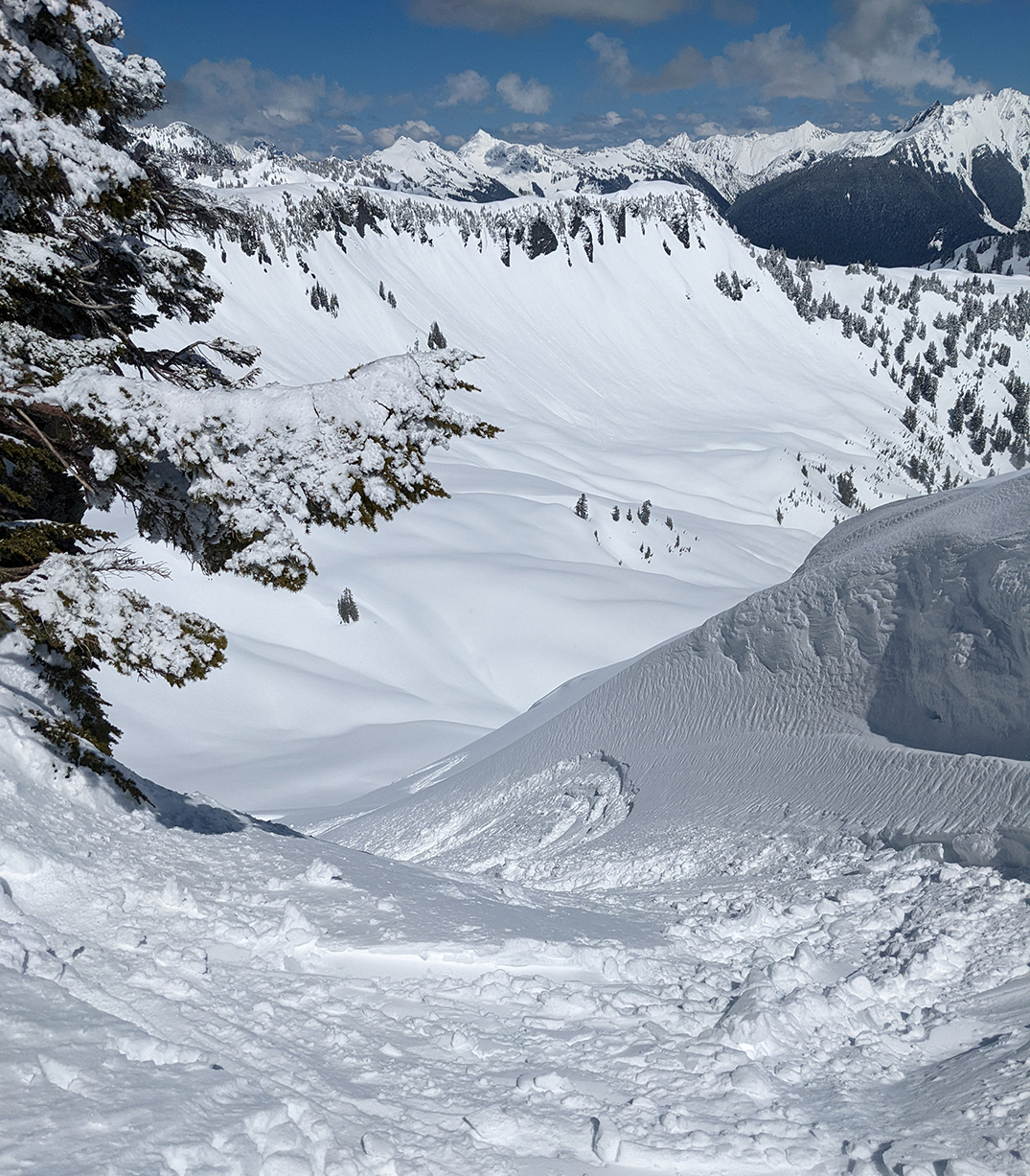 Where we dropped in on the North Face of Video Peak.

After some initial hesitation on my part, Michael talked me into dropping in at the weakness near the rock near the summit. The sun was in full force by this point, so we tried our best to move quick so that we could get a second run in before the hazard started to creep up.

The first run was cautious, but blissful, the snow still excellent. We stopped at several points to discuss and reassess the next portion, dropping all the way back down the skin track. With huge grins on our face, we both agreed we wanted to give the face another go. 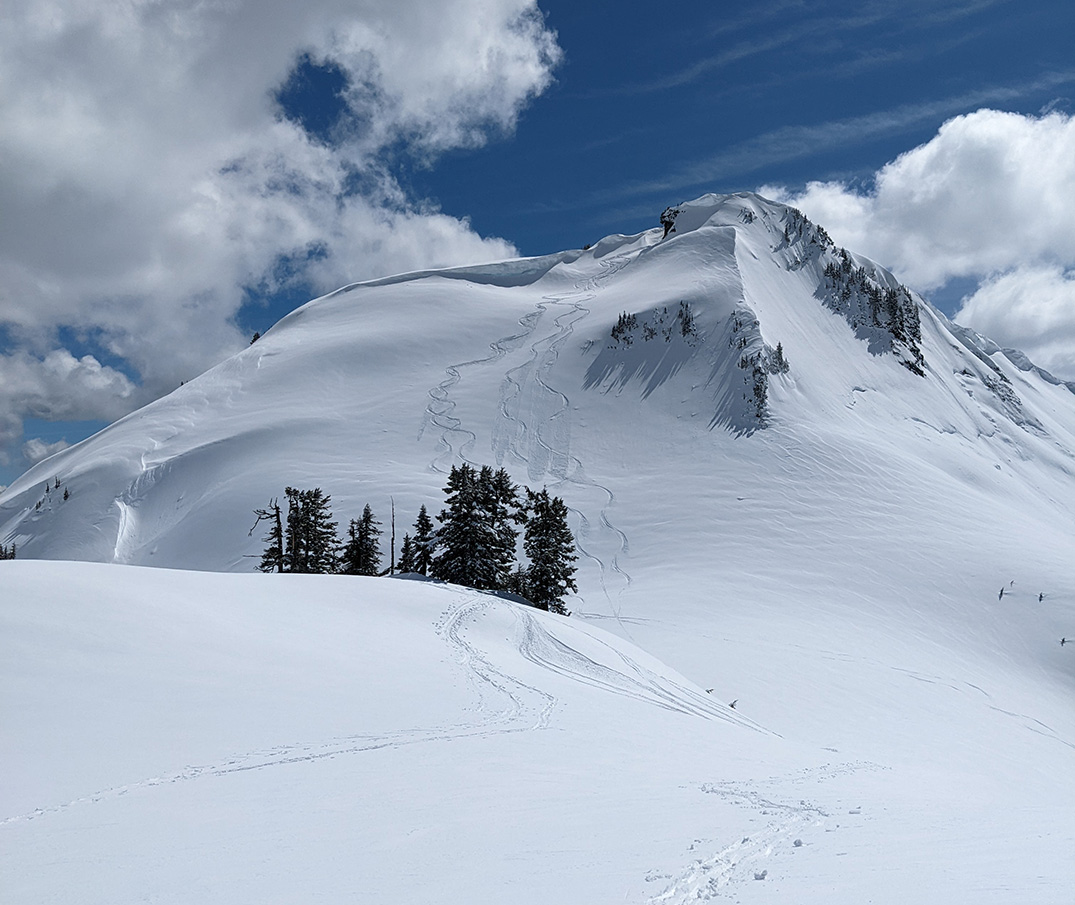 Our two runs on the North Face of Video Peak.

We skinned back up, much faster this time having already set the track. I dropped in first this time and we agreed to just rip it all the way down the the pass since the snow was so stable. We both went for slightly steeper terrain this time and had some of the best turns of our season. 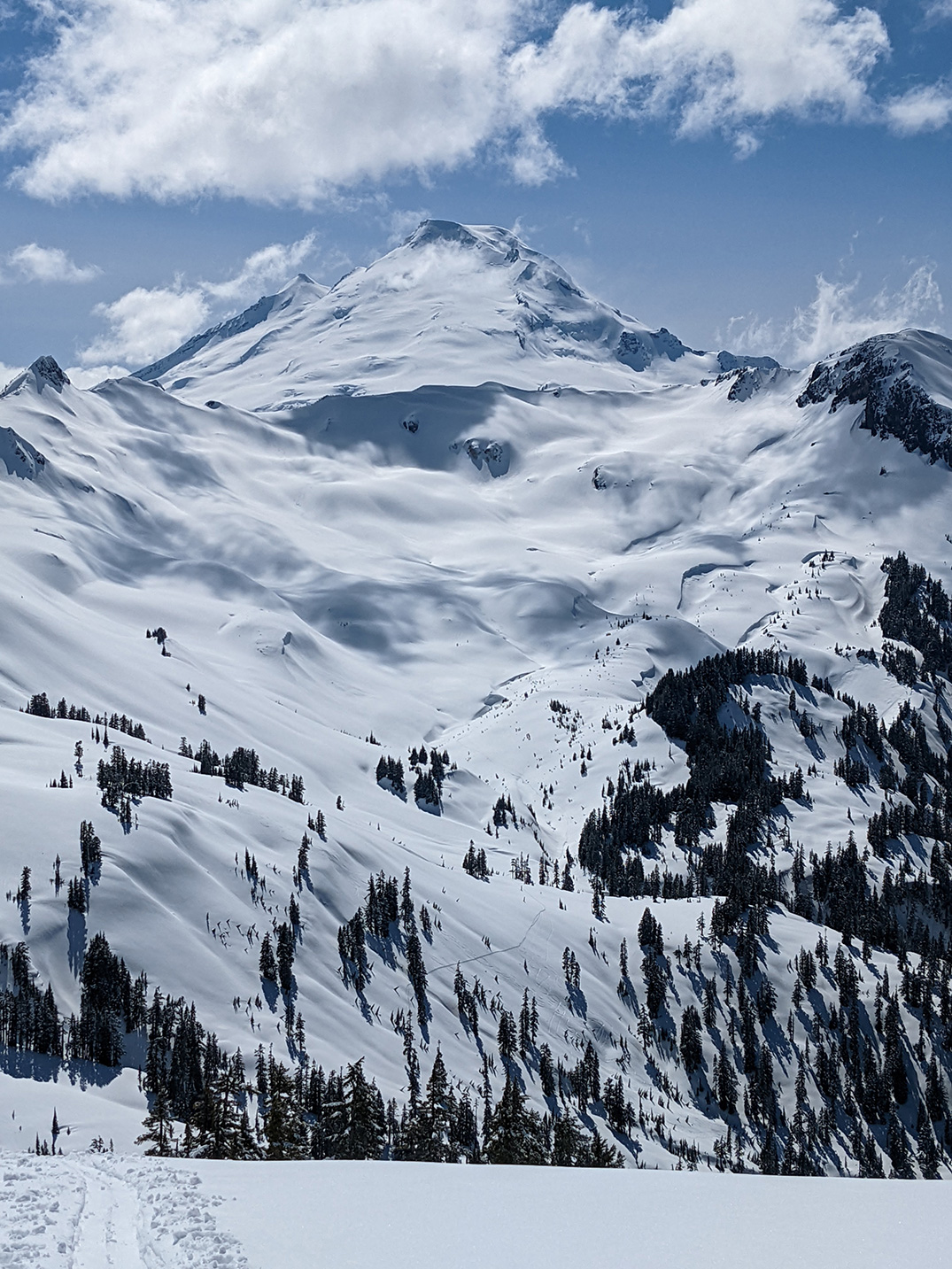 Koma Kulshan in full view from the West saddle of Table Mountain.

We refueled on top the Ptarmigan Pass, then traversed the West side of Table Mountain. Much easier this time with snow as compared to my first time when it was all iced up.

Our second goal of the day was Alaskan Amber, a short steep line near the top of the corner of Table Mountain. After some deliberation on the place to drop in to avoid the cliffs on either side, we finally worked up the courage and charged the line the best we could.

We then worked our way down, taking some steep lines before cutting out far right since there was barely any avalanche debris, a rare sight. We collected ourselves on top Bagley Lake before making the final skin out to the parking lot. We would make a total of eleven transitions before the day was over, but was it worth it.