The morning started with our traditional stop at Whitaker Cafe to grab some coffee and ambience. This time the parking lot was bustling, it must have been the first weekend of guiding season. Given the large crowd, we moved quickly to try and get a spot near the front of the line at the gate.

Note: During Winter, the gate to Paradise at Longmire opens at 9AM and closes at 4PM, so plan accordingly. You can follow the MountRainierNPS Twitter account for real time updates on when the gate will open for a given day. Also, make sure to bring tire chains.

The snow from the previous storm had settled and the week leading up had contributed small amounts of consistent snow with cold temps and fairly low winds. A sunny window was forecasted for most the day, and since the gate was still opening at 9AM, we knew we had to move fast.

The avalanche forecast was potential for wet loose, so we had some concerns about the chute, given it was so large, as well as the steep walls on either side of the valley exit. Every time we told someone we were doing the chute, they responded that you want to do it good conditions. The reasons for that became more apparent throughout the day.

We started the approach at around 9:20am and boy was it was hot down low, I always seem to underestimate the power of the sun. We sped our way up, feeling the pressure of the conga line behind us. Along the way, we talked to an older gentleman for a bit that looked like he frequented the area, and it was great to get some insights and share concerns and goals for the day. 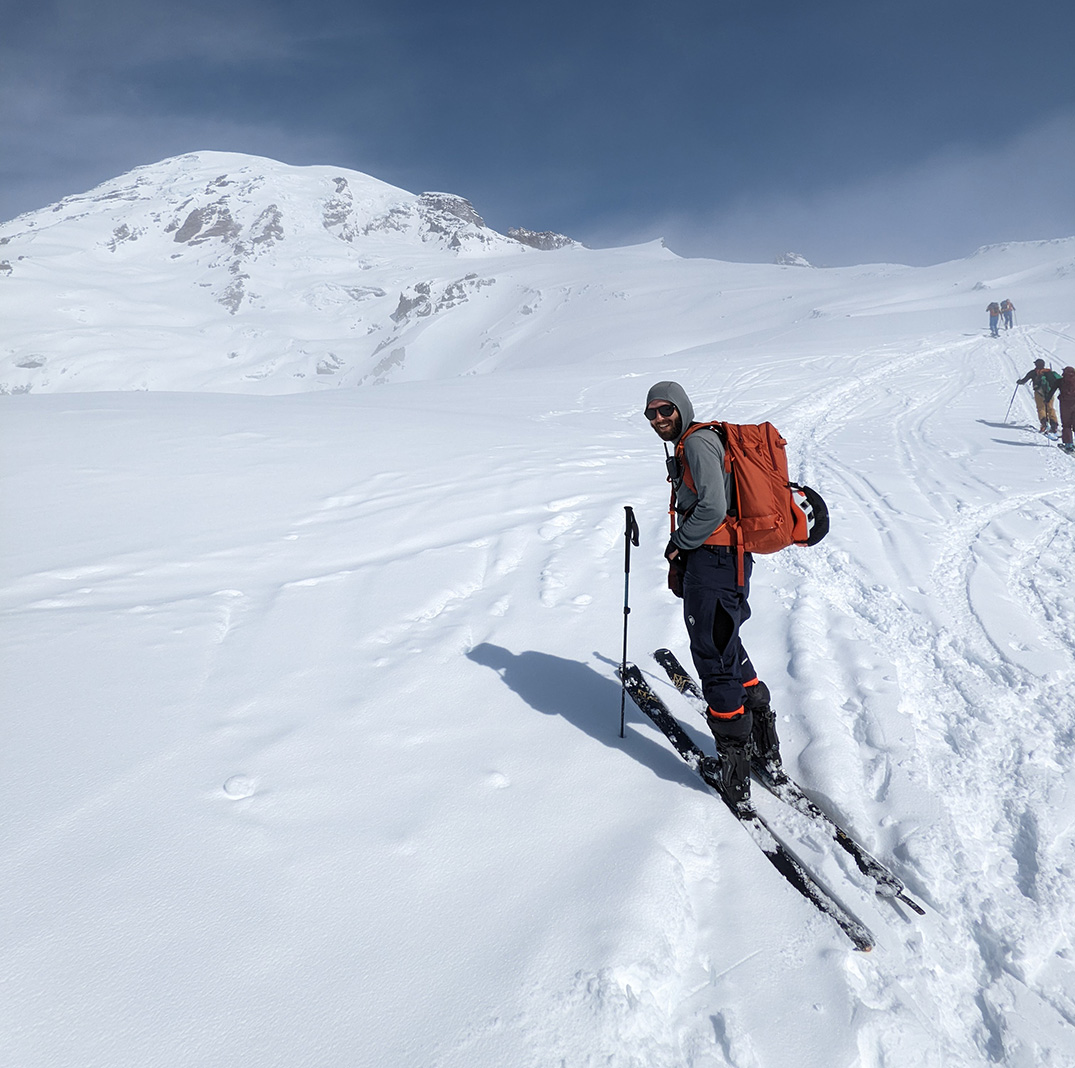 Taking a quick break to appreciate the beautiful sights of the Nisqually Chute.

Given the power of the sun and the head start it got on us this morning, we split off from the main crowd early and decided to only go up as far as we needed to drop into the chute so the snow didn’t bake anymore than it already had. 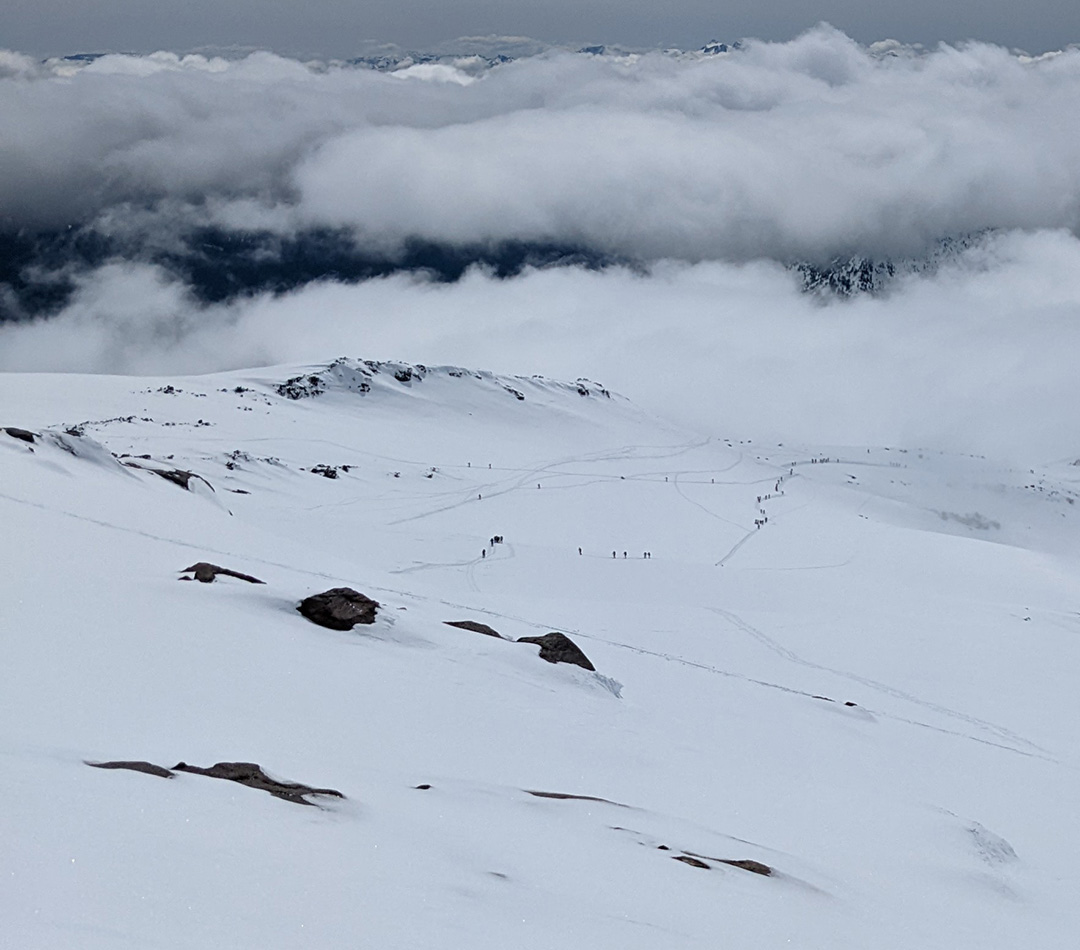 Looking back it looked like someone spilled an ant farm.

Once we neared the transition spot we picked out at top of rock outcrop, the clouds rolled in over the Nisqually River valley. By the time we finished transitioning, five people ended up beating us to the chute. Michael dropped in first, and I made sure to get a video of him going down, which seemed to last forever, but in reality was around a minute long. At that point, the shear size of the chute started to sink in. 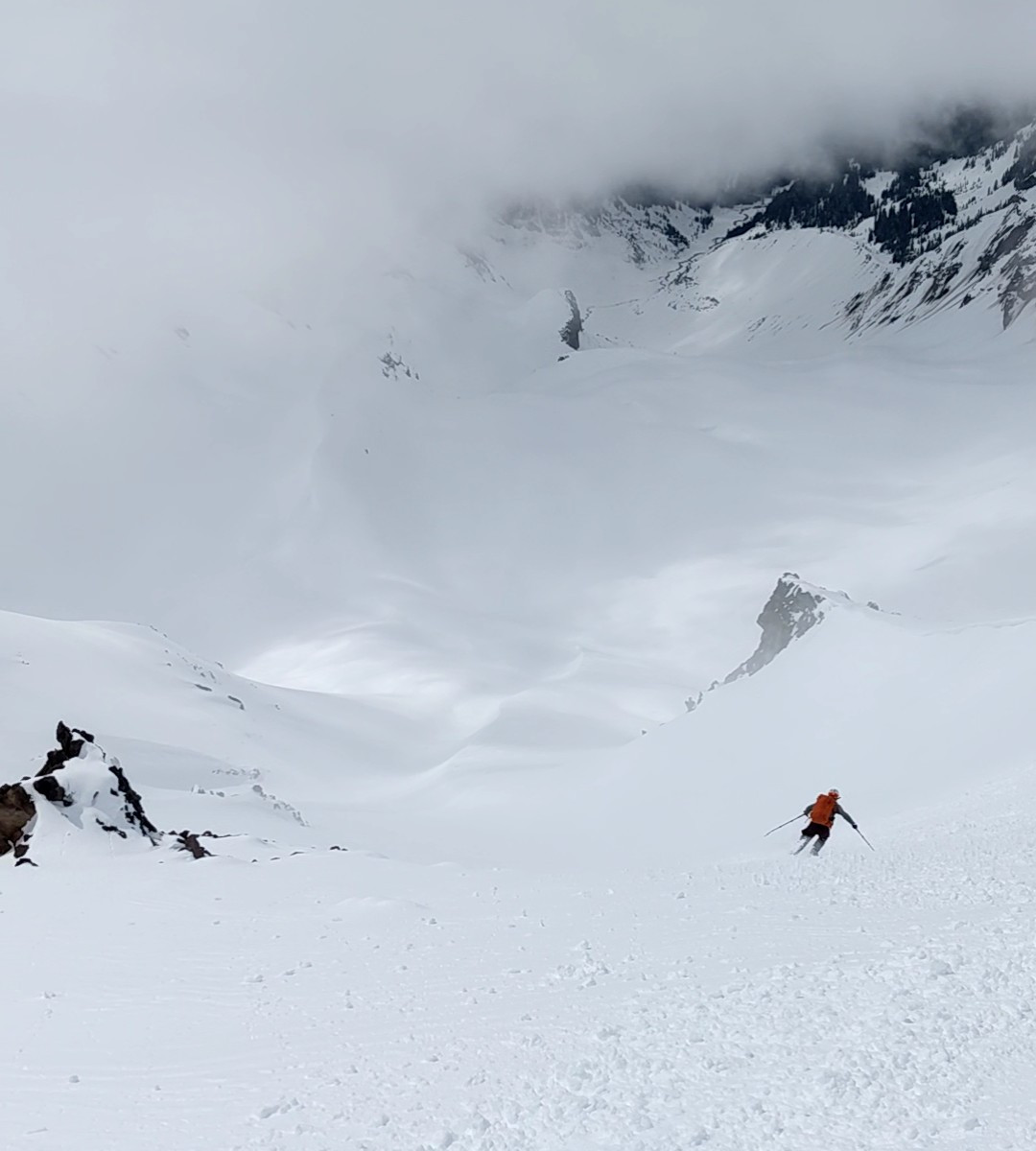 Michael dropping in on the Nisqually Chute.

He gets skiers right over the lip at the bottom of the run and signals that he is in an island of safety. I start making my turns, and the chute feels like a big open bowl it is so wide. By the time I reach the end my legs dead, I definitely need to work on my ski stamina.

The snow in the chute was great, but as soon as I met up with Michael in the island of safety it started to get soft, warm, and grabby. We decide to finish the bridge run, versus skin up and out, and made some miserable turns down to the next section. 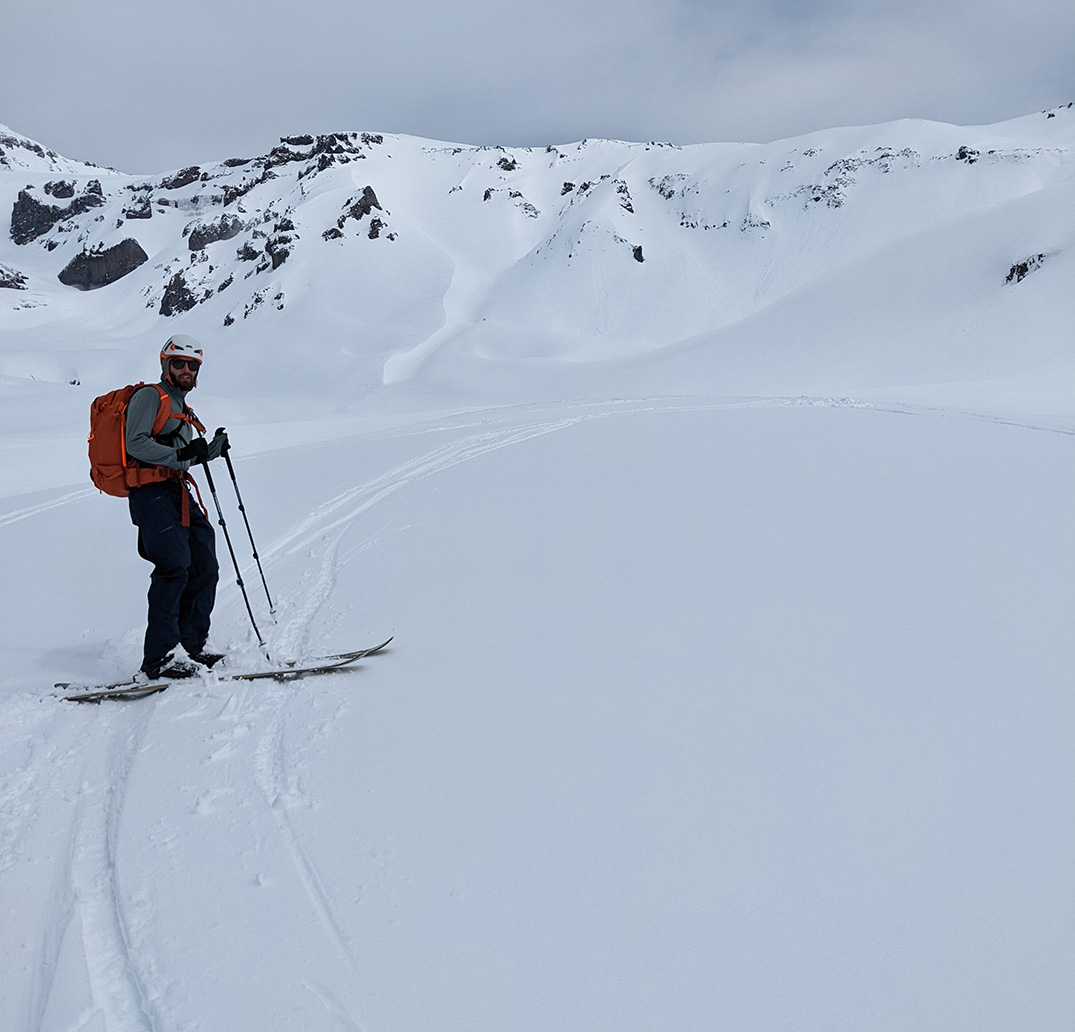 Looking back at the chute. We stopped to watch some others drop into the chute that’s looker’s right.

The snow got better for the next set of turns, We weren’t sure if it was reverse corn from the cloud cover, or had just been more protected from the sun. 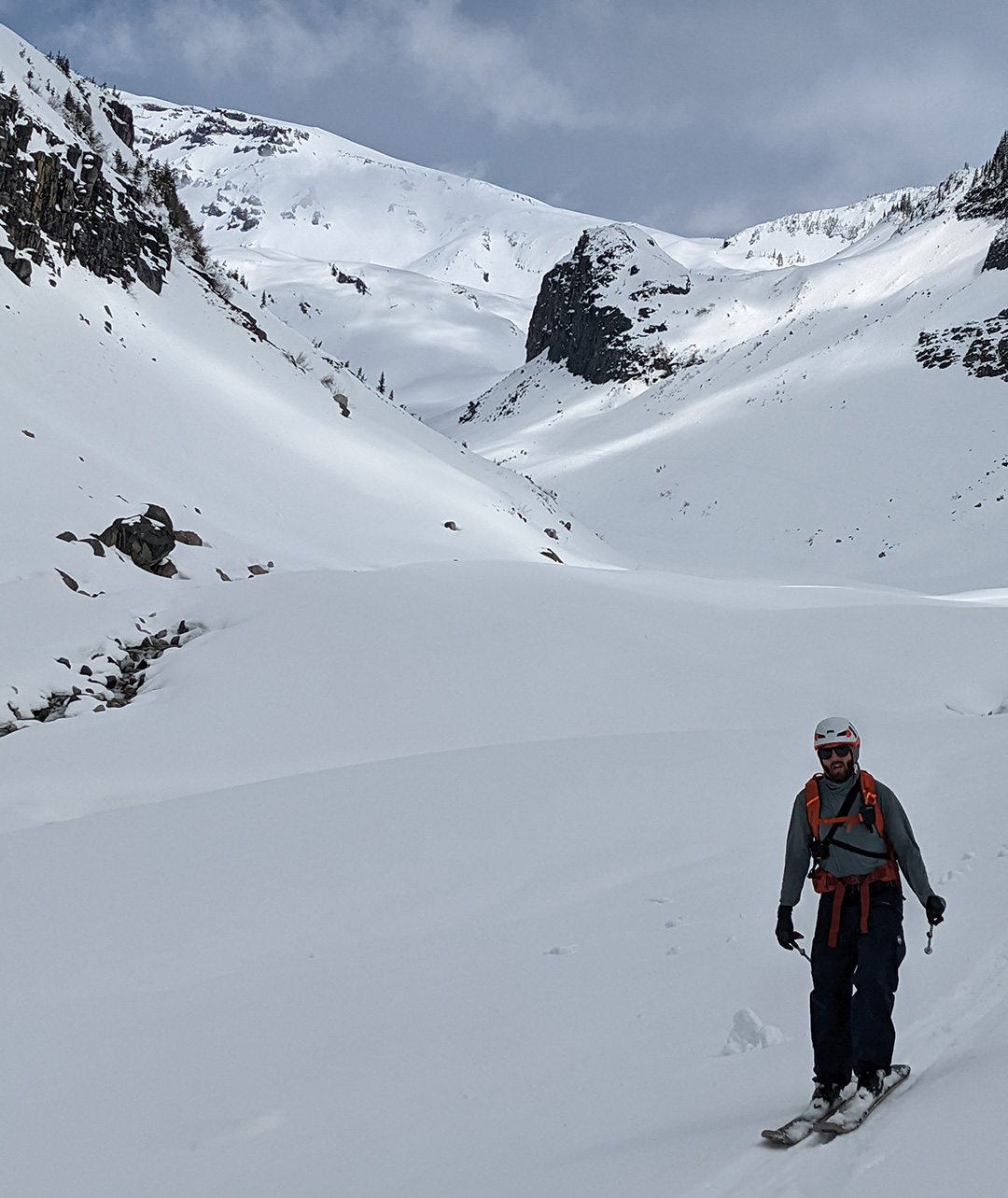 There was a nice section of corn half way down the run.

From there we followed the tracks that were in ahead of use to the right into more grabby snow, trying to keep speed, but ultimately having to do the awkward ski stepping up the hill so we could build up enough gravity to side hill out.

Tip: The two guys that had dropped down the chute just downhill of ours ended up catching up and took the more left, Southern, route staying high and were able to cruise out with out much effort. 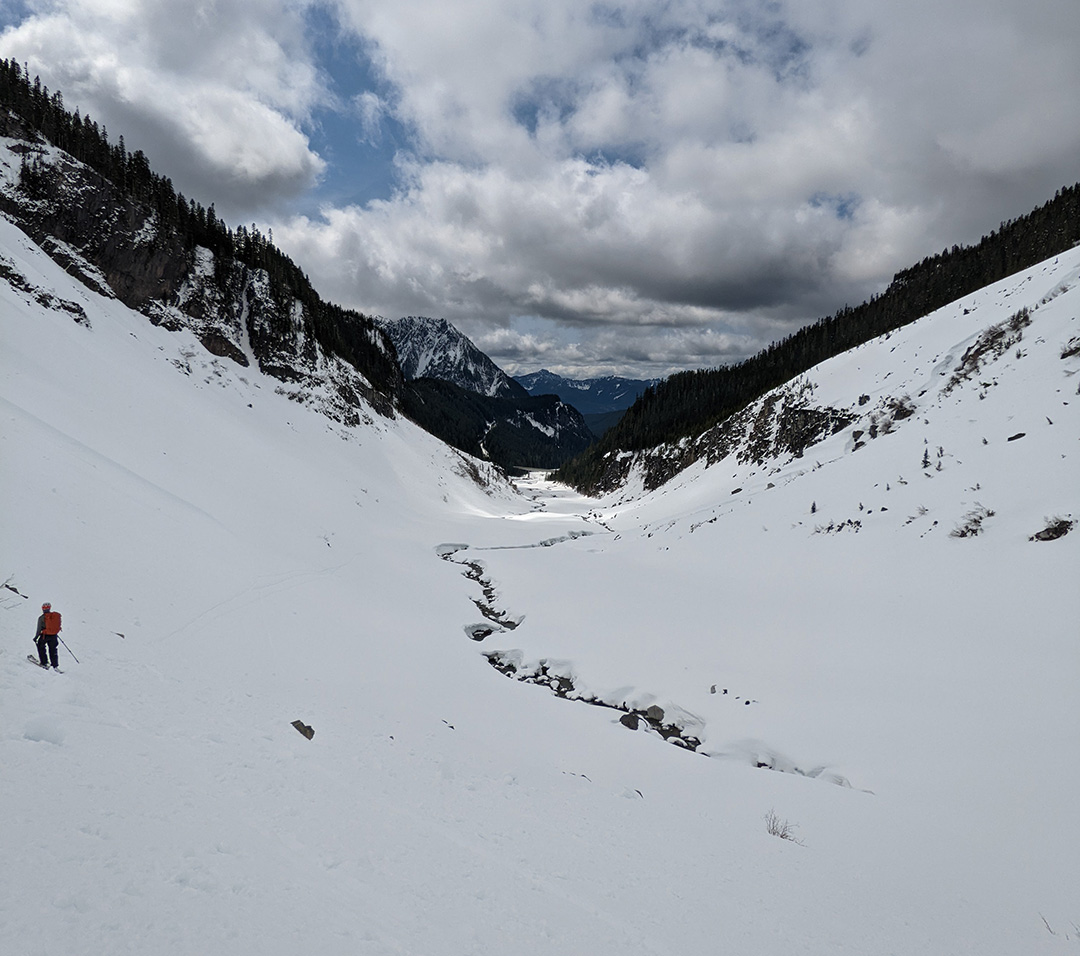 The last leg of the run with the bridge in sight.

Skiing along the creek on the way out was beautiful. We reached the bridge around 1:00PM and took some obligatory bridge pics, then finished the day at Rainier BaseCamp Bar & Grill for burgers and beer.