In order to get an adventure climb in for the season, Michael and I decided to try out Easy Getaway, an under visited climb with no established trail. I got to Cutthroat Trailhead a little later than I originally planned, to a sky full of stars and a fairly prominent Milky Way.

Not only did I manage to forget my sleeping bag, but I also didn’t think about preparing for a cold start in the morning. Which lead to a lack of motivation for the alpine start we had originally planned on doing.

The late approach started off easy enough, with a little light bushwhacking on a mostly open trail, before it turns left into steeper terrain. If you pick your path wisely, you can follow open areas all the way to the top, with only small patches of dense alder. 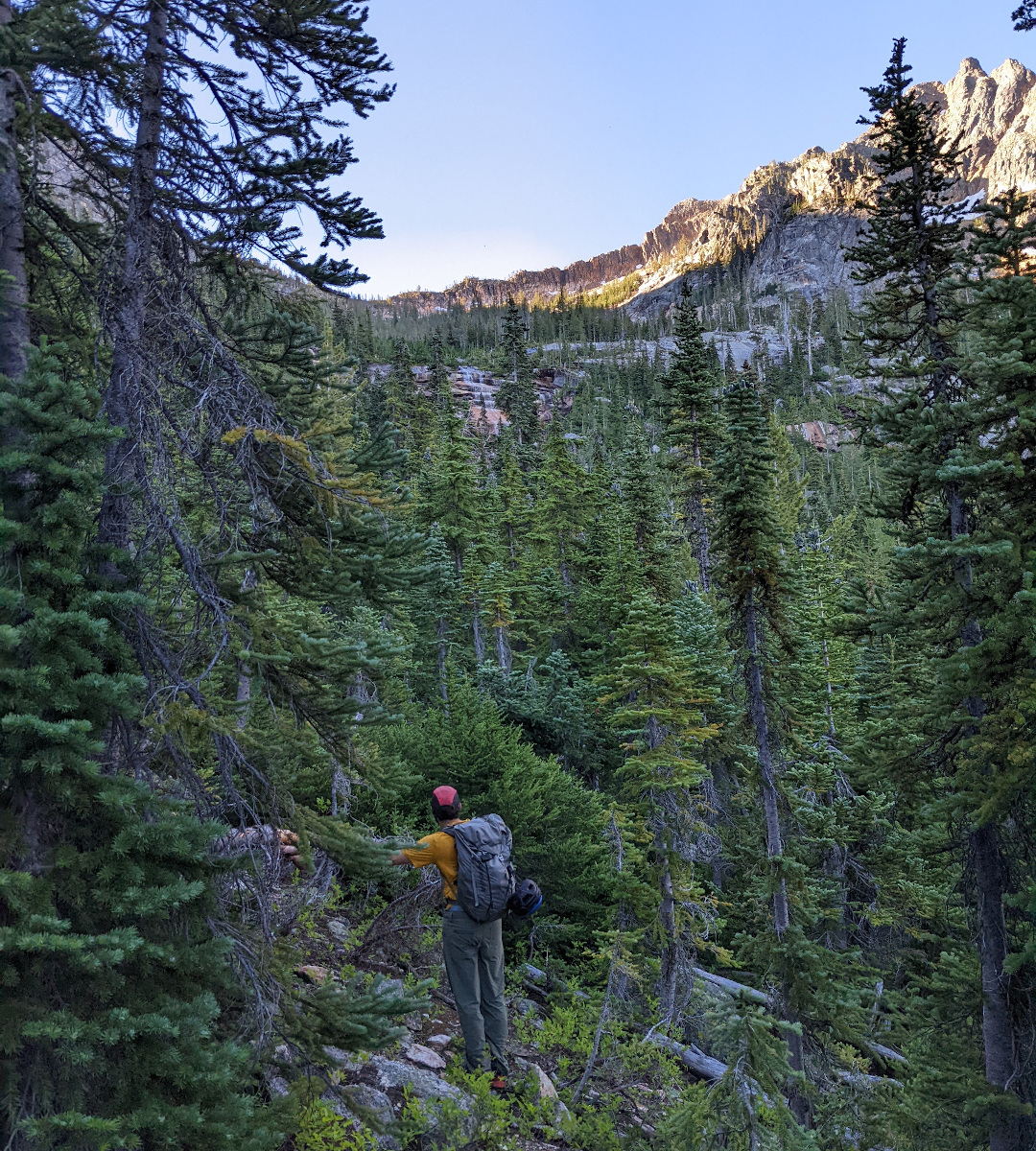 Taking a moment to enjoy the surroundings, a cascading waterfall in the distance.

The approach eventually changes to mostly scree and small talus, but if you play your cards right, you can keep that to a minimum. The downloadable GPX on Mountain Project was a great help and likely saved a ton of time and effort.

The platform where the first pitch starts is pretty obvious. Make sure to look up for the streaked block that is on the fifth pitch to give yourself some general direction. 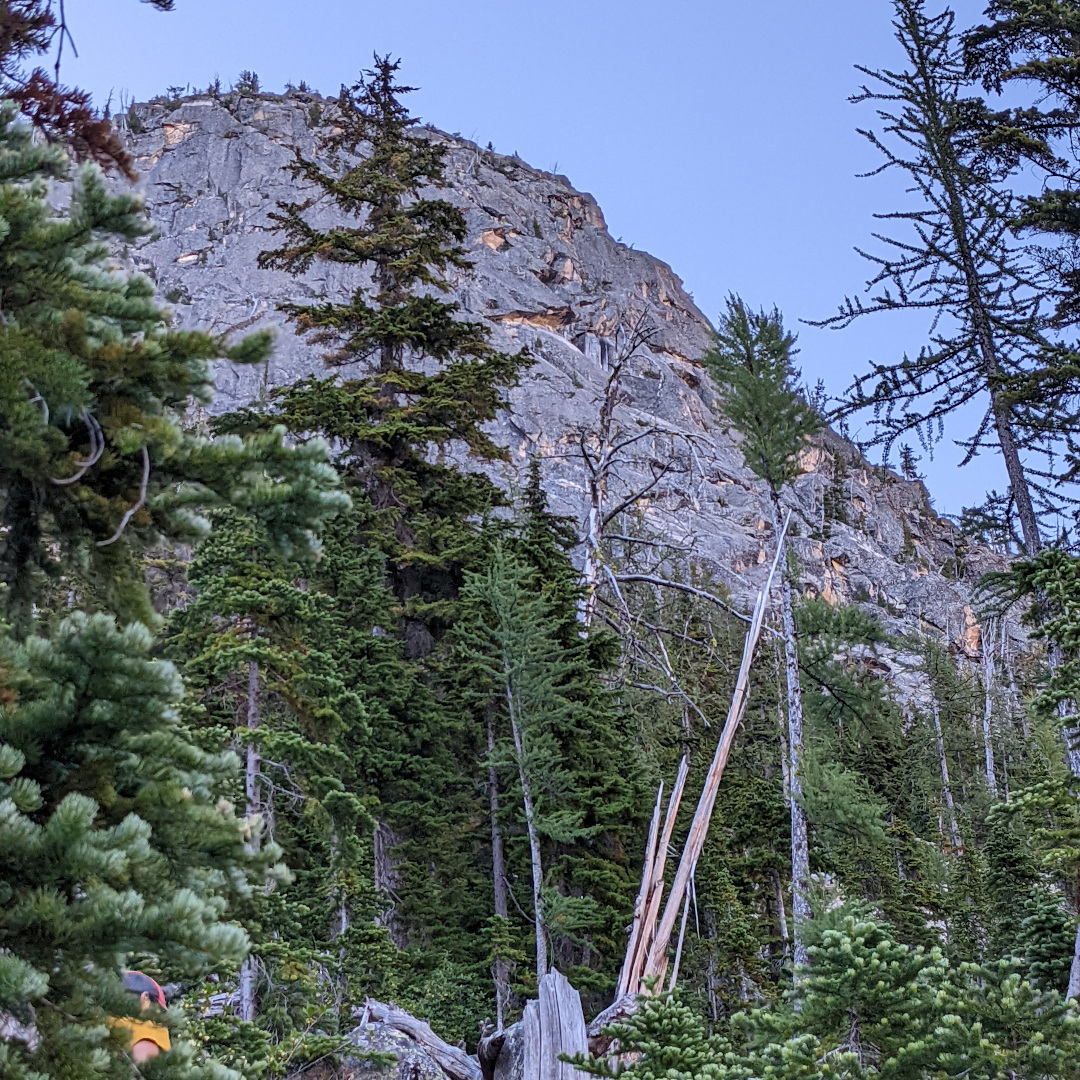 Looking up at the route. The streaked block just to the left of the top of the dead tree in the center is the fifth pitch.

The first pitch starts up the right facing crack. The middle slab section was tricky to protect, so I ended up just launching through the crux move. After that, pull the overlap and head left to setup an anchor near the base of the next right facing corner.

This pitch was fairly dirty with a crappy fall zone, otherwise it is nice.

After pulling the short corner, head left and make sure to follow the thin separated ledge until you’re underneath the larger overhang.

A heady pitch compared to the previous ones. Try to finish all the way up at the tree, as the next pitch is wondery.

The right variation is fairly straight forward if you don’t overthink the traverse. Stay low and work your way over to the base of the crack system on the right.

The chimney is short and fairly secure. I went right shoulder in and kept the gear I wanted to use on my left side. Enjoy the view as you try to work your helmet past the constriction.

To make it easier on the follower, drop a loop from the first tree over the right of the crack to grab the bags. From there it’s fairly easy climbing to finish, we ended up just using a hip belay.

We found sun damaged slings wrapped around a large boulder on the right. Given their condition we decided to back them up with an additional slings. Bringing rappel gear on adventure climbs is good rule in general.

We rapped to a tree below with more sun damaged slings that we backed up, then to the ground. 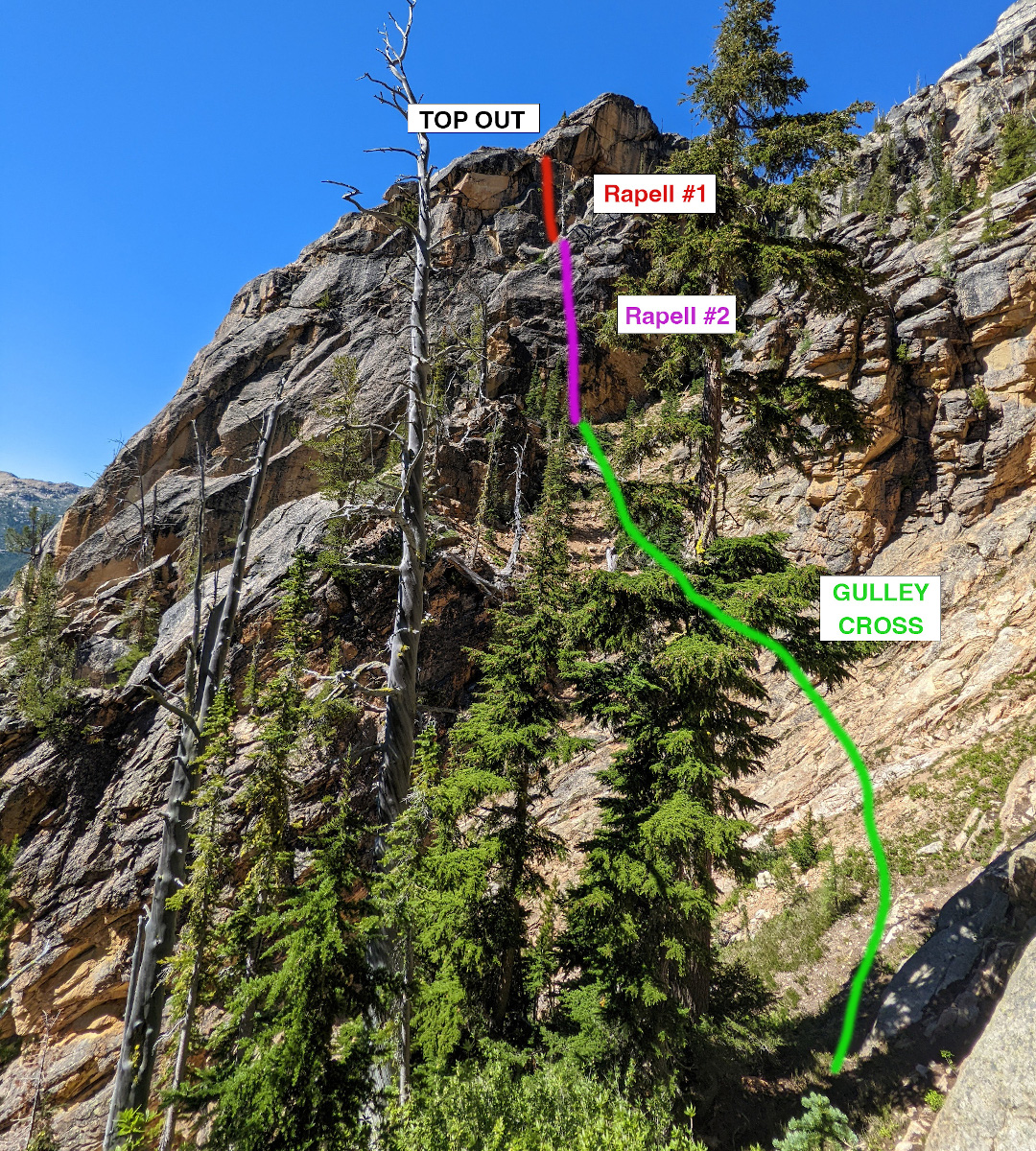 Looking back at the rappel route we took.

From there we crossed the gully and started the traverse up a grassy ramp then started to contour towards the next gully system.

Note: I would try to resist the urge to descend from contouring too early, as you’ll have to go through loose scree vs slightly more pleasant meadows.

Maybe it’s because it was a hot day, but this descent was worse than expected. It isn’t too difficult to find the starting platform again if you left bags, and there isn’t much additional elevation to gain to do so. 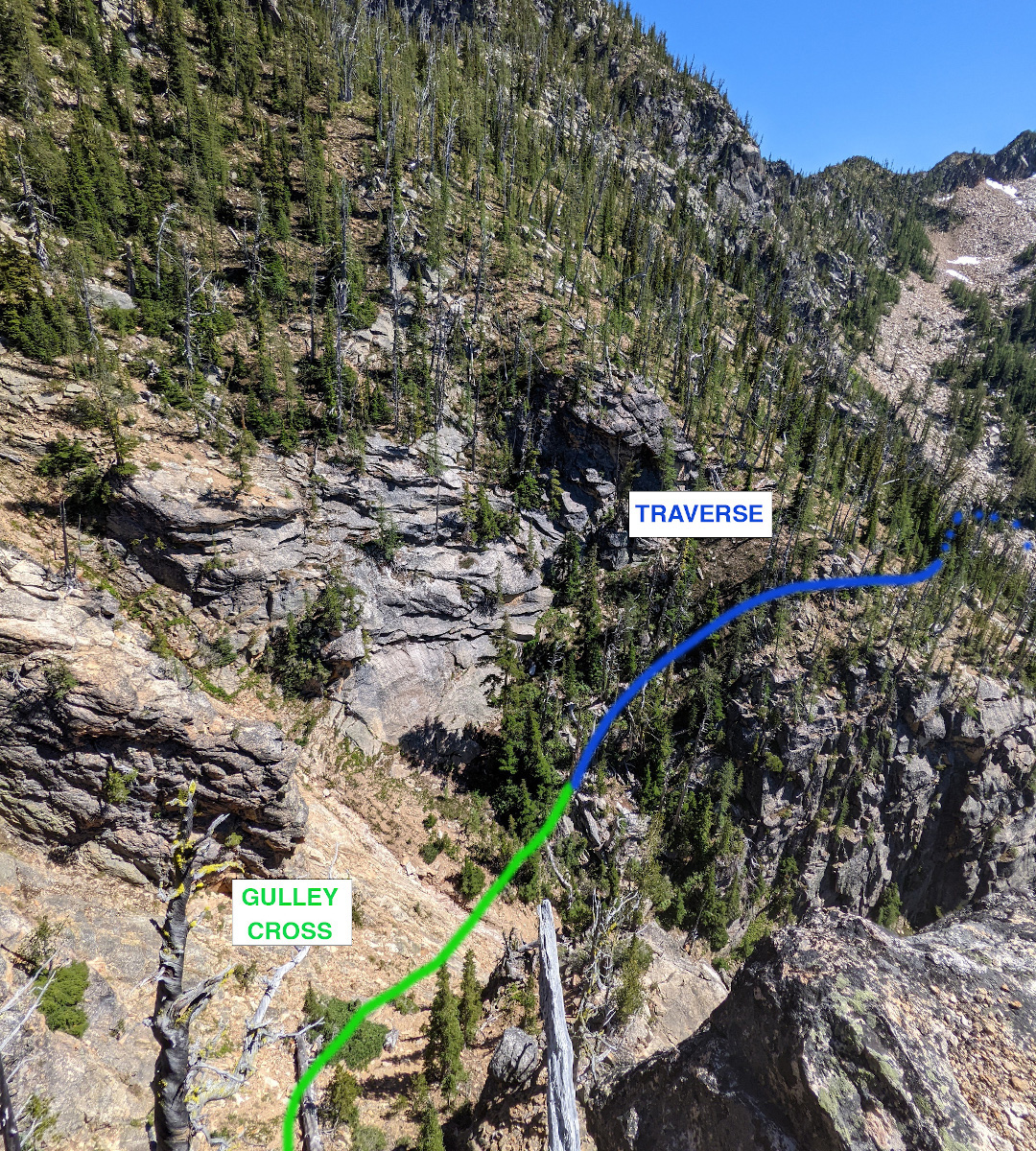 Looking across from the top of the rappel towards the descent traverse.

Finding the optimal line on the way down proved to be more difficult, as we ended up charging through thick sections of brush versus taking the time to find a path that may or may not have ended up being a dead end. 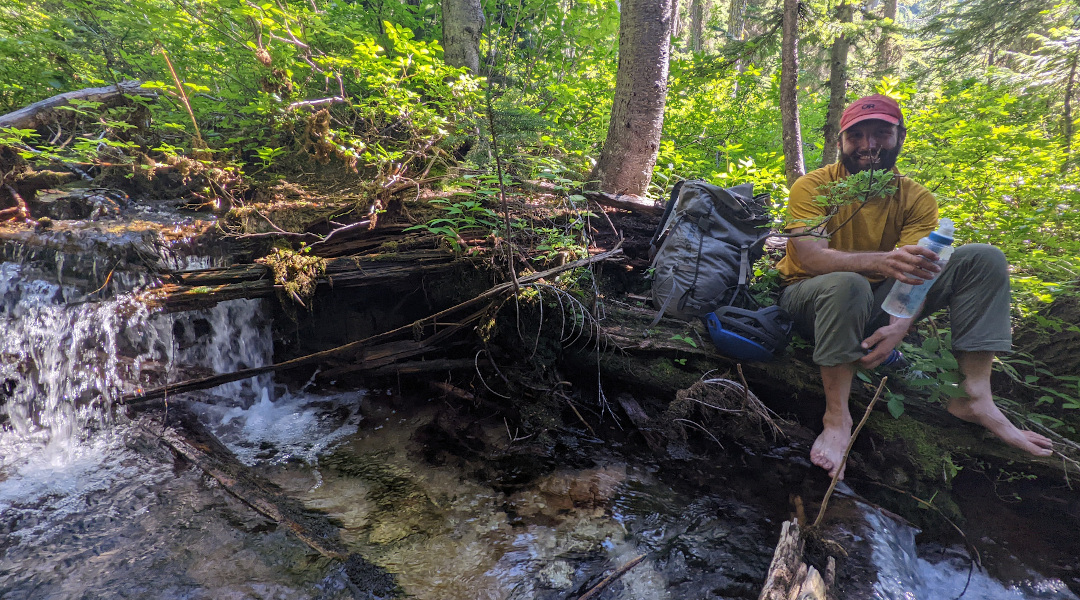 A much needed reprieve at the creek.

The creek gets big enough to dip your feet in down low and makes for a nice reprieve before the last push out.

Tip: Bring a water filter as there is a possible water refill up high near the traverse, or you can wait until further down the descent where the creek gets a little larger.

All told, it was a nice adventure climb, it just would have been more enjoyable had we planned on it being such an adventure. The fact it is Northish facing, gives you time to get most or all of the route done before the sun hits if you get an early start.