Washington Pass opened later than usual this year, due to the never ending winter, but there luckily was a weather window the Friday after it opened so we jumped on it.

I slept in Mazama at the Goat Creek Sno-Park and Michael stopped before the pass to sleep since he had to come up from Seattle after work. On his way to meet me at the amazing Mazama Store he noticed there wasn’t much parking dug out this year and most of it was already full.

We quickly grabbed our coffee and breakfast and headed out to park and shuttle cars before all the good spots were taken.

We started at the Blue Lake Trailhead, skinning up and out of the trees, getting a closer look at the Liberty Bell group for the first time as a light dusting of snow fell. 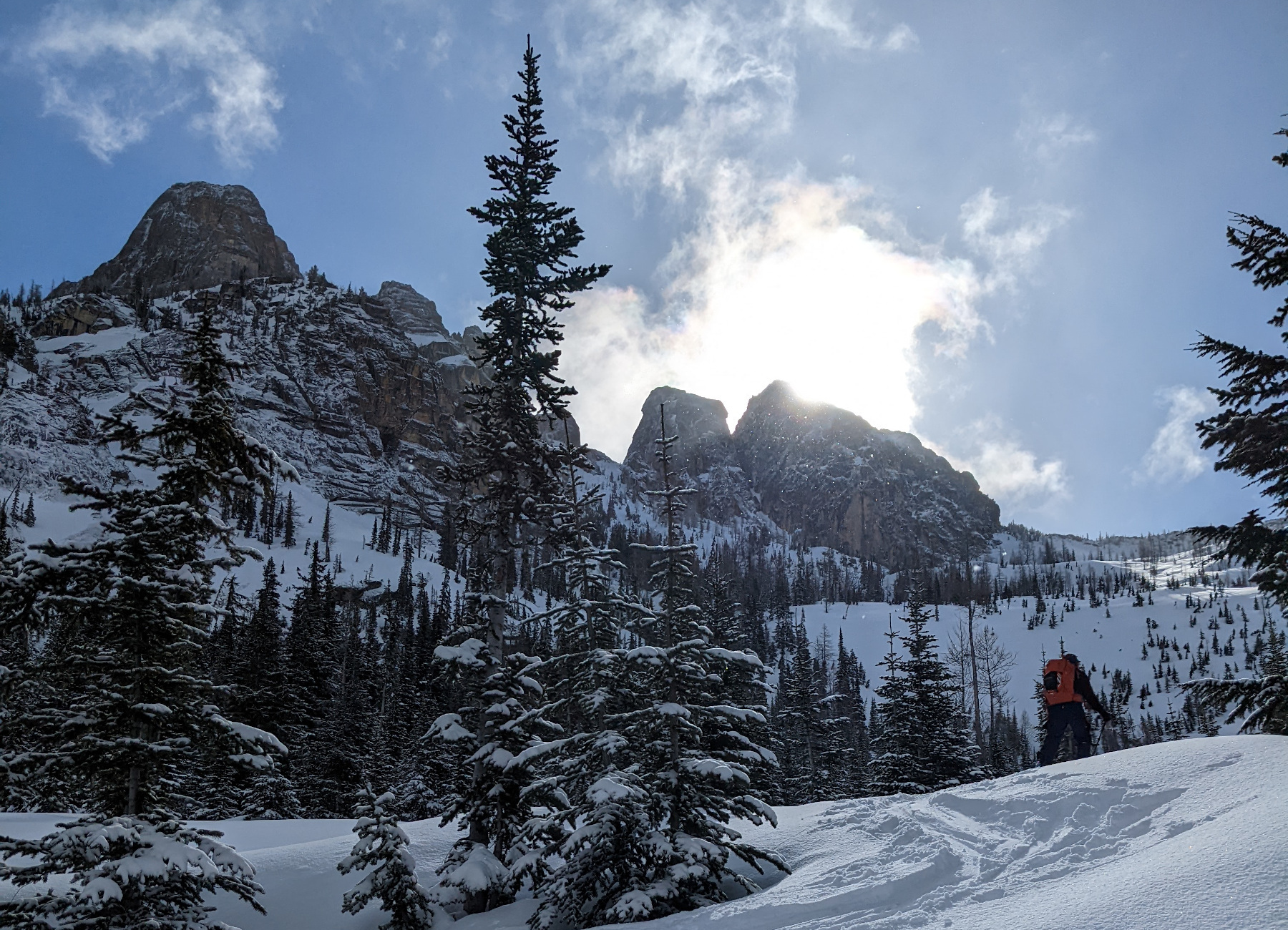 Breaking out of the trees on the approach, the sun rising over the South Early Winter Spire.

This being my first time at the pass, the views of the Liberty Bell Group were absolutely stunning, and I was incredibly grateful these were the conditions under which I got to experience them.

Everything was covered in a healthy amount of snow still, giving that true winter wonderland feel. I couldn’t imagine having access to this zone in the Winter. 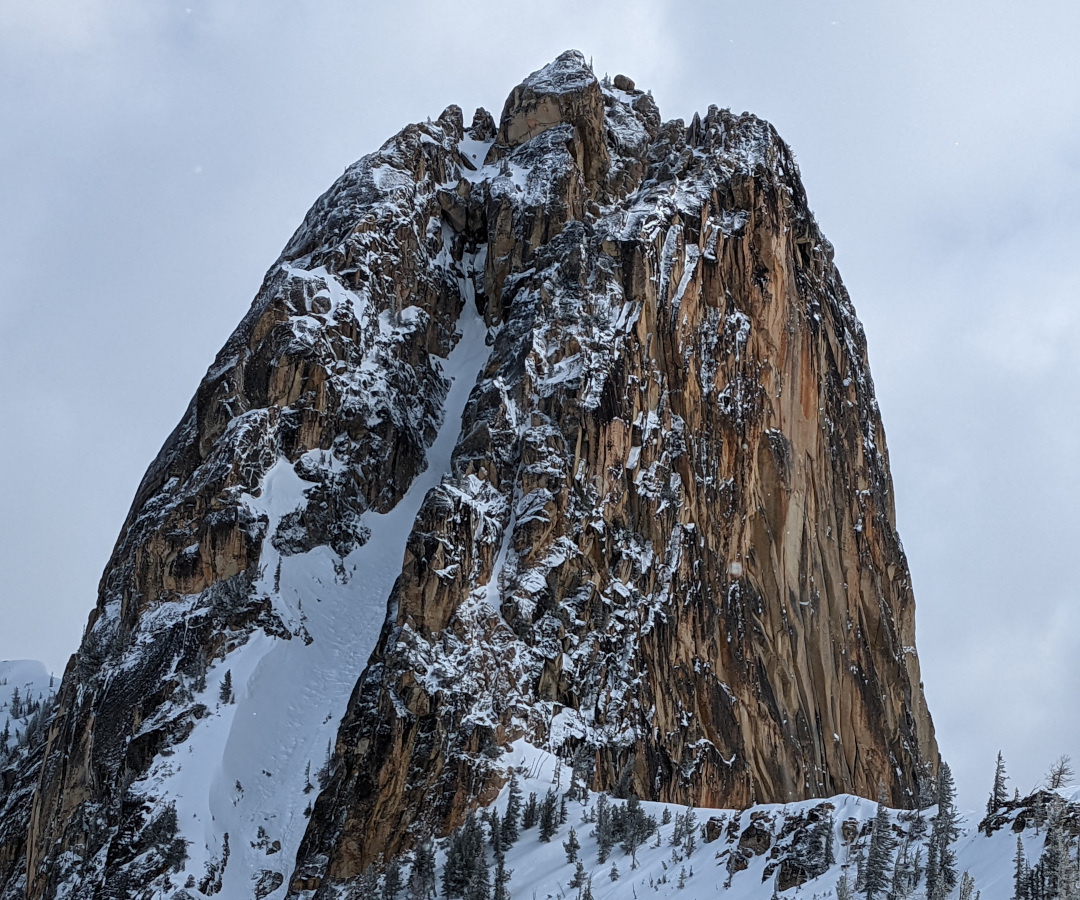 Looking back at the South Early Winter Spire.

We stopped for a second below the cornice push for a quick snack and to analize the situation. Given the Winter like conditions, we followed the established skin track up. 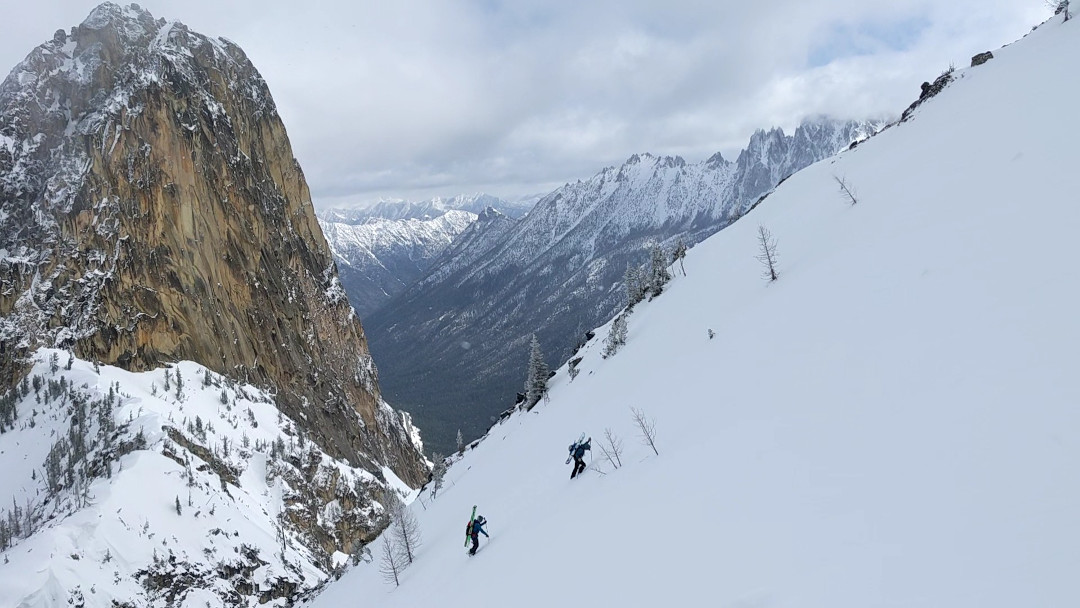 Bootpacking up the Blue Peak Col, the safer option that the large cornice.

Some others opted to take the safer bookpack up the lookers left. I decided to try out my new pair of Petzel Leopards out for the final boot pack and they worked like a charm.

A large group of us transitioned while soaking in the views, before dropping down on Madison Avenue. Chunder from a previous heat spell days before met with the low temps in the teens the night before and made for not the best snow, but it was still possible to sniff out some good lines with less chunder. 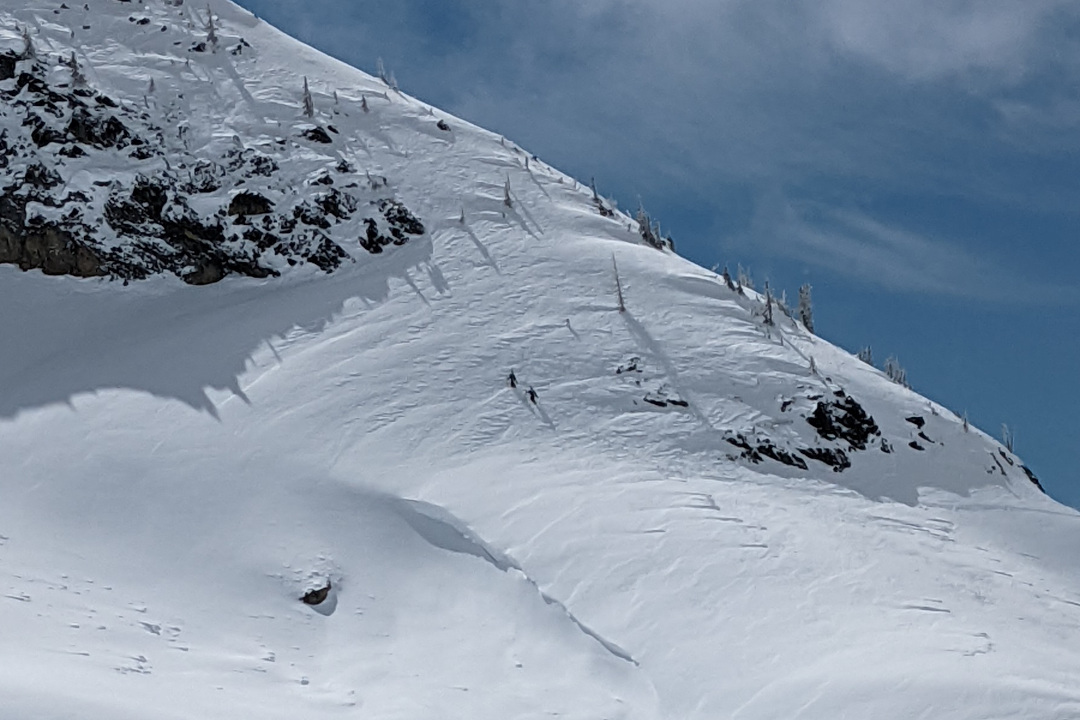 We chatted with some people that lived in Mazama and ended up following them to an alternate saddle that was left of Copper col.

On the way we saw two guys going for the coilior over Copper Pass, inspiration for next season. 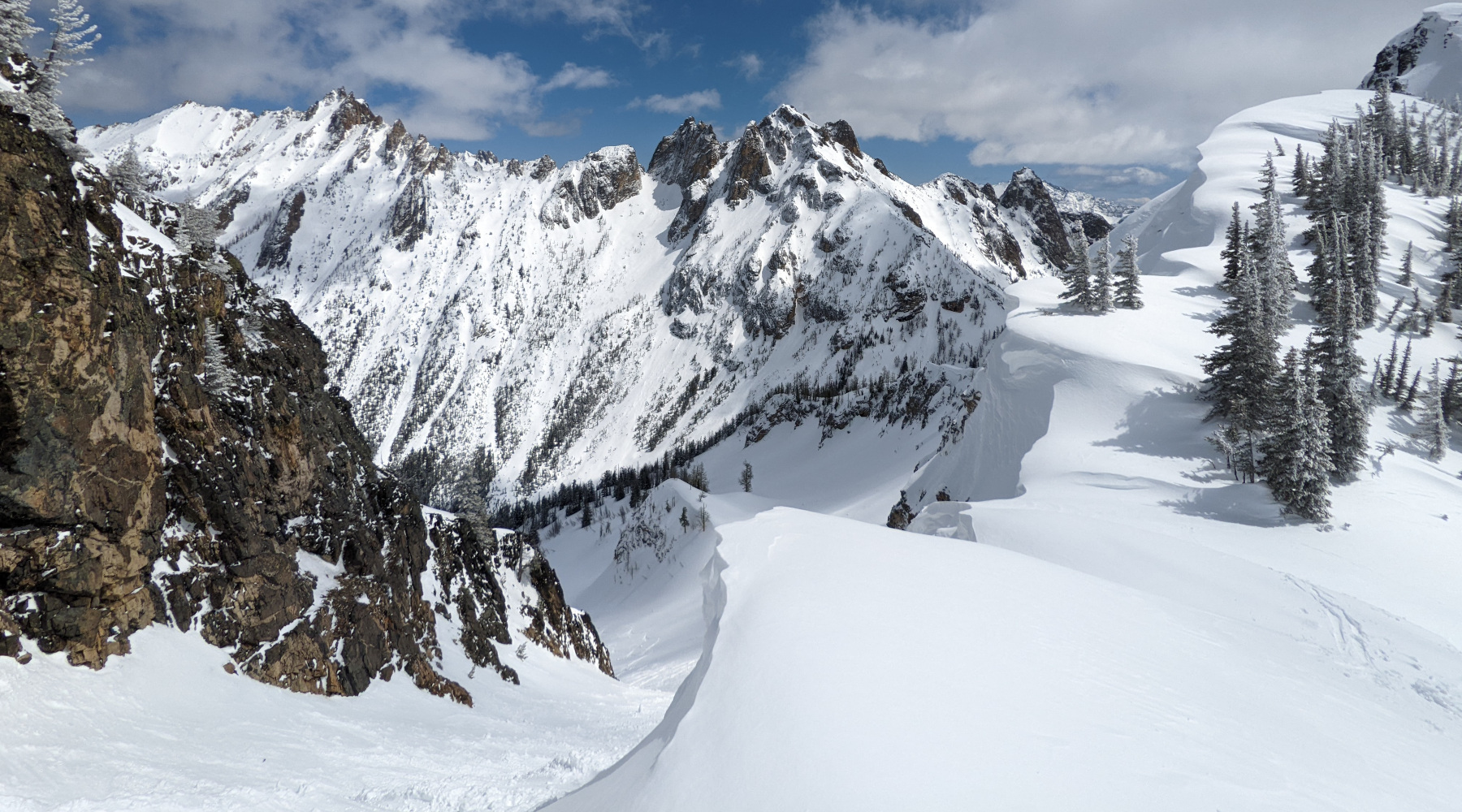 Looking at Kangaroo from the saddle below Pica Peak.

The views of Kangaroo and Wallaby from the top of the saddle were amazing, providing an excellent view of future missions.

After some discussion on the best entry method, we dropped into the icey conditions up top, but again sniffed out more good snow down lower. The final run out with the hairpinin the background was dreamy to say the least. 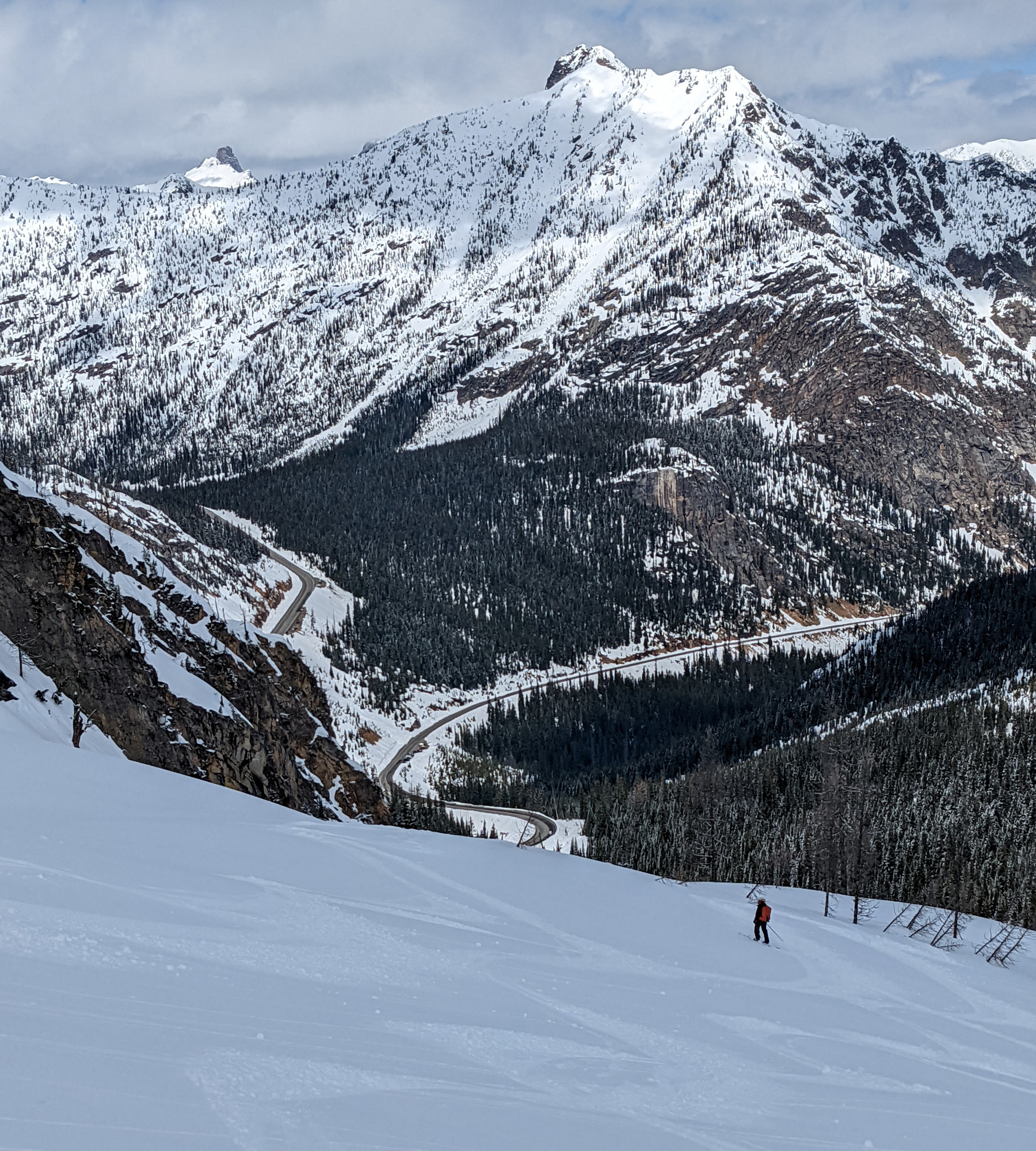 Skiing back down to the Highway 20 hairpin, looking out at the belly of Hinkhouse Peak.

Once we hit the road we started the long walk to back to the truck, Walking up on the snow bank to get out of the road and right when it started to get worse I hear an engine slowing down behind me, knowing it can only mean one thing. I turned around to a loan skiier in a first gen Tacoma offering us a ride, a PNW dream come true. We summarized the conditions we expierenced the best we could as some sort of compensation for the ride.

After we switched back into some comfortable clothers, we went into Winthrop for a big meal with a bucolic backdrop. A perfect end to the tour.